Marillion, WebUK magazine, and that photo...

"My" first-ever magazine cover photos... and it's a Marillion, standing-ovation, show-them-how-much-we-love-them, Wolverhampton-Civic-full-of-fans, wrapped around the WebUK magazine.

WebUK is published four times a year, and this edition focuses on the biennial "weekends": three nights of Marillion music, fans arriving from all over the world, the "conventions" that I'm already saving up for for 2016. 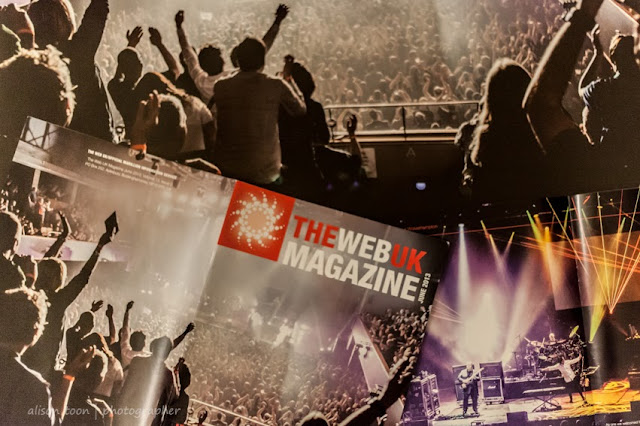 So exciting to see a "Toon" on the cover. There are a few more from yours-truly inside, too, along with many other great photos from other photographers, from all three weekend conventions, including photos from Andy Wright (of 9:30 to Fillmore fame). And the amazing story of how the world record was made for recording and filming a live show and having it on sale. Overnight. A very short night. On sale really early in the morning. Its called, Clocks Already Ticking and it's on sale from Racket Records and it includes a performance of all of Radiation, plus a whole second set.

I am feeling both proud (that my pictures are being seen by a lot of people), and very very humbled (without Marillion, without their amazing and hard-working management team, without the awe-inspiring relationship between the band and the fans built of many years of trust, and, of course, without the music, the wonderful music, we photographers would never ever capture anything worth looking at, not at all).

That cover shot? It was at the end of Brave, played in its entirety, the Saturday night in Wolverhampton, England. (It helps when you know and love the music, it helps that Marillion's management let us shoot throughout the performance, and more than anything, it's the band that inspire such a reaction from the audience. It's a feeling that stays with you--part of me is still in Wolverhampton, reliving that weekend.) It was a performance that brought many of us to tears. Brave is a "concept album", the story of a tragic life, and yet it's hope. It's Brave. And later this year, we'll be able to buy a DVD of Brave, recorded live, in concert, at this year's Marillion weekends. Want a preview? See-hear!

(To hear a little more about the relationship between the band, and the fans, take a listen to Mark Kelly's recent Ted talk about crowdfunding. Listen to the end, because the key is right there.)

Thank you again, Marillion. I'm so happy you're in my life. And other bands? You should take note. This is what you do, to keep fans for a lifetime. It's all about trust... both ways.