Before I begin: three things that you need to know. One: I'm very, very wary of tribute and cover bands--I want to see, and hear, the real thing. Two: I grew up in England, Queen on the radio, Queen as the highlight of "Live Aid", and I consider Freddie Mercury to be one of the greatest vocalists who ever lived, and while I love Queen's music, it was really Freddie's singing that made it something very, very special. And three: Brian May's hair was as much a part of the band as his guitar playing. Seriously!!!! 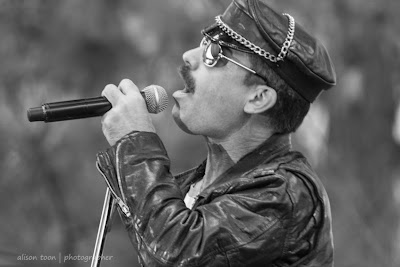 So there were a few barriers that Queen Nation had to break down. And it took a couple of songs. At first I was just laughing at Brian's hair. Yes, Brian May's hair was there. That was a good start! 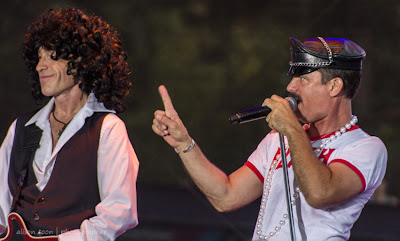 But when Gregory Finsley (as Freddie) sang "Love of My Life", I knew I was listening to more than just a few guys covering Queen songs. They were much, much better than that.

The show just got better and better. Queen Nation not only plays Queen songs--very well: they also become the band members, carrying the personas of Freddie Mercury (Gregory Finsley), Brian May (Mike McManus), John Deacon (Parker Combs) and Roger Taylor (Peter Burke) in mannerisms, personality, style. (Though Brian May becomes left-handed when performing with Queen Nation. I wonder how he does that???) 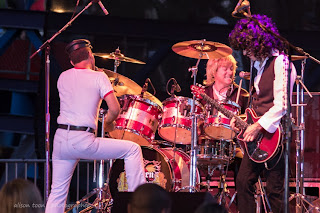 Gregory Finsley can seriously carry Freddie Mercury's vocals: there will never, ever, ever be another Freddie, but... it's really good to hear someone who can do this so very well. 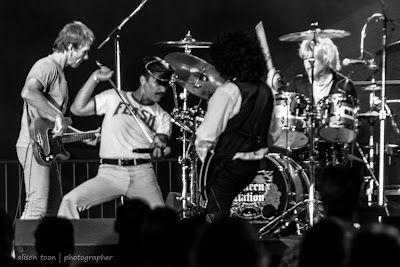 It was a darn good show. And the state fair audience loved it! Singing along, dancing, and really having fun. 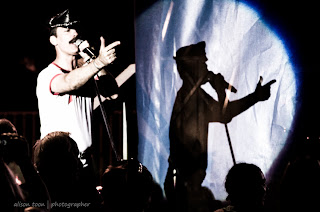 (I hear they are looking for someone to play Freddie in an upcoming movie, as Sacha Baron Cohen has decided he doesn't want to do it any more. Any volunteers???) 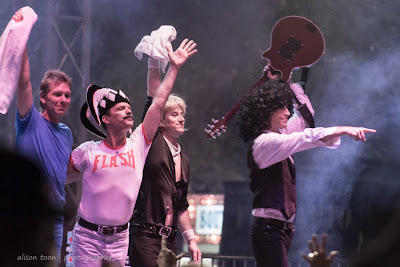 This was one of the completely-free shows at the state fair this year. You didn't have to line up and wait for a wristband, you just walked in. And it may have been one of the most fun and enjoyable shows of the fair.

Lots more photos on Flickr, including some crowd shots. If you were there and want to share them with your friends, use the Flickr "share" function and don't copy. I'm still hunting down the folks who stole an earlier post--and if you wonder why I have to say this (again), see the earlier post on copyright.  So just push the "share" button, OK?