My first, happy memories of rock concerts are from a social club, Syston Working Mens' Club in Leicestershire, England, to be precise. A dark room with a bar in the corner, a badly-lit stage at one end, lots of seats around small, wonky tables that spilled fizzy drinks and booze onto the carpet. Young mothers dressed up for a night out; men with glasses of beer, happy to be at the end of a working week; the older, purple-rinse crowd waiting for the bingo and the raffle, and we kids dancing in front of the stage. The band played 50's and 60's covers, and if they didn't already include it, by the end of the night there was always a group of young women shouting for the Shadows' Apache. So last night's show at Cromer Social Club was a bit like a time-warp and going home, right down to the kids dancing. Almost.

Until, that is, it comes to the band.

The Bloodshake Chorus do, indeed, play 50's and 60's covers, with the occasional 70's hit thrown in... but not in any way that you've heard before. They look nothing-at-all like a throwback to mid-century modern: they're a team of blood-drenched zombies with Ivan-Moodyesque handprints, and they turn these wonderful, classic songs into hard-rock-metal masterpieces. Vocalist Mann Slaughter's voice is huge. It's like Hallow'een at an Elvis convention, without the Elvis but with every other musician from his era. I loved it.

The Bloodshake Chorus have been on stages much bigger than this, supporting and with artists including Madness, Toyah, Skunk Anansie, The Slaves and many more. I could easily see them entertaining a huge crowd at big rock-and-metal festivals... seriously good!

I'm not sure that the regular patrons of the Social Club were quite ready for this, but by the end of the evening, the entire room was singing along. And not one person called for the Shadows.

(Most surreal part of the evening? An intermission... for a raffle. Yes, a raffle. Seems that all shows in Cromer, whether for a pier show, a tribute band, or a group of hard-rock-metal-zombies-playing-exquisite-unique-covers has to have an intermission. Is that just a Cromer thing, or have I missed something during my many years overseas??? No bingo though... that's on Thursday!) 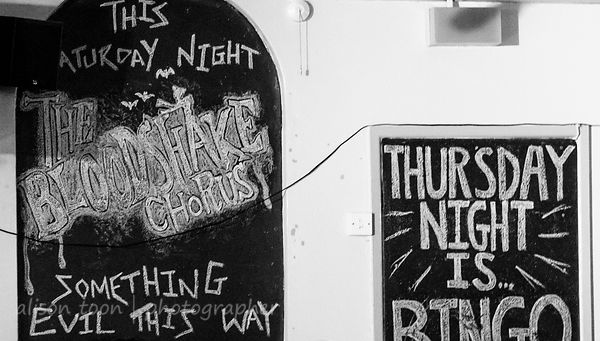 The Kinks. Shirley Bassey. The Animals. The Zombies. Dolly Parton. Tom Jones and many more... all given the Bloodshake Chorus treatment. Here's an example:

Catch The Bloodshake Chorus if you possibly can... well worth a trip! Find dates all over East Anglia, here on their Facebook. They'll be back in Cromer for the Carnival and to perform at The Welly in August... next weekend at the Brickmaker's in Norwich, which looks a bit more like a regular concert venue. (See, I'm starting to find the local music scene.)

Posted by Alison Toon Photographer at 2:56 AM