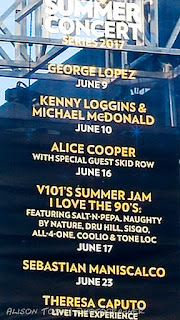 Thunder Valley Casino's summer concert series kicked off last weekend, and runs through the hot Sacramento months with shows every weekend. Top of my list to see was the awesome king of shock-rock, Alice Cooper, and... awesome as ever!

There was Alice. There was a snake, huge and strong and gorgeous and menacing. There was a guillotine, a blade fall, and a severed head.There was an electric chair and Frankenstein's monster, huge, running around the stage, towering over the band. There were human-size dolls and spiders in the eyes and top hats and tails and makeup and everything you'd expect from an Alice Cooper show, though they didn't play Elected this time, darnit.

There was a wonderful band, amazing guitar from the wonderful Nita Strauss, who can shred with the best: an impressive drum solo (Glen Sobel) and great rock from all the members of Alice's band.

Alice Cooper is still the ultimate showman, still bouncing all over the stage; costume changes with every song, bringing the roof down (though in this venue, there was sky above). It's hard to see that Alice isn't still in his twenties... the five decades of experience just add to the draw.

Remember when your parents freaked out because you were listening to Schools Out? I do! Oops.

Setlist: about twenty songs total, including Billion Dollar Babies, No More Mister Nice Guy, Lost In America, Feed My Frankenstein, Only Women Bleed, I'm Eighteen, and School's Out, which morphed into Pink Floyd's Another Brick in the Wall and back to complete the show.

All you have from me for this show is a few words, and a couple of cellphone photos. You have to go see Alice yourselves... he never stops touring. See all the dates here, including the Americas, Australia and Europe! Wow... look at that schedule. Seriously, dude... he never stops. And thank the music gods for that, because there are a huge number of performers who have learned much of their trade from Alice Cooper. 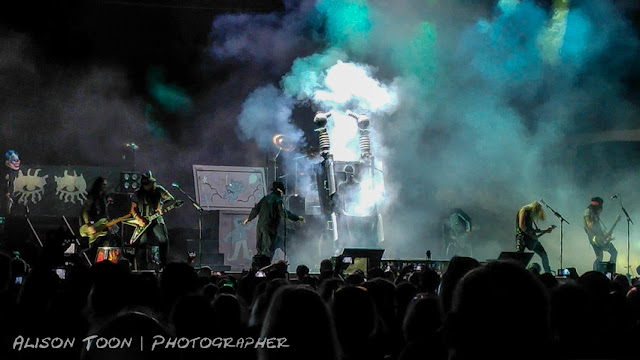 Posted by Alison Toon Photographer at 10:47 AM No comments:

Hell, HELLYEAH, that was one hell of a show: HELLYEAH return to the Ace of Spades

Last time that I saw HELLYEAH at the Ace of Spades, Sacramento, in 2015, it was all about the high-energy music: last night, it was the music, and more: one helluva light show. And what a show... "supergroup" (yes, they are a group, and yes, they are super... and yes, their lineup includes members who previously made musical history in other bands: Chad Gray with Mudvayne, Vinnie Paul with Pantera, Tom Maxwell with Nothingface). Together with Kyle Sanders on bass and Christian Brady on guitar, they bring us heavy-metal-hard-rock with an intense, driving heartbeat, tough and heavy guitar and bass, and a huge dose of non-stop energy. Chad Grays vocals are always strong, and range from intense, fast and gritty to smooth and melodic.

Vinnie Paul is the first of the band to arrive on stage, behind a drum kit so tall, and so high, that you had to go to the back of the room to see a glimpse his happy, welcome face, but even if you can't see him, you know he's there, all evening, with every beat. The rest of the band step onto the stage, and Chad Gray arrives, blood all over his face, dripping from his goatee... I think it was fake, there were no obvious wounds, but this is metal, right?

Touring the latest album, Unden!able, the setlist included not only the heavier, aggressive HELLYEAH songs that the band are well-known for, but the recent cover of Phil Collins' I Don't Care Any More (probably the finest-ever cover of a Collins' song, IMHO) and the latest song that's receiving a lot of airplay, Love Falls, both from Unden!able.

I've seen them several times since 2014 (Aftershock 2014 being the first) and each time, I enjoy the show more, and from the reaction of the crowd, I'm not alone. One thing that strikes me: these guys are happy together on stage. They are having as much fun as the audience.

This USA tour is huge, and takes in several festivals too: check out the tour page for full details and HELLION deals.

For many more photos from the Ace of Spades, 14th June 2017, see the gallery: click here!

Other HELLYEAH reviews and photos from Toon's Tunes/Cameras and Cargos:

(And if you haven't already: do check out HELLYEAH's video for Hush (from Blood for Blood), and support the fight against domestic violence and sexual assault. Everyone has a part to play.)
Posted by Alison Toon Photographer at 6:34 PM No comments:

Poptone, goths, POW!, and it's a family affair

A Tuesday evening at the Ace of Spades in Sacramento, California, and the downstairs floor is filling up with a generous, if not sold-out, crowd. The background music, songs I can sing along to and I'm showing my age by knowing all the words to T Rex's Metal Guru, which is still worth hearing and still valid, even today. I look around and I feel I'm in a bit of a time warp; goths as far as the eye can see. Poptone is in town; Daniel Ash and Kevin Haskins plus Haskin's daughter, Diva Dompe, playing songs from Bauhaus, Tones on Tail, and Love & Rockets. Appearance, such a huge part of the goth scene; black everywhere. My daughter and fellow writer Jade should have been here, in her black-eyed-goth-from-France getup, but she's at home because very-late-pregnancy isn't conducive to standing in a crowd in Sacramento temperatures for hours on end. So I'm her proxy tonight. And the evening is more than simply Bauhaus-goth; it's also post-punk-synth-pop-and-rock, Poptone style.

The show opens with POW!, straight-to-the-kisser synth-pop-rock from San Francisco, and the time warp takes over the evening, big time. Punk meets New Romantics meets indie-rock, with a heavy dose of distortion and... quirkiness. I hear the Buzzcocks and early Bowie. I see Sparks. And after listening to POW!'s Here Comes The Spade again several times in the past 24 hours, at last I recognise the audio connection that's been bugging me ever since the show... The Undertones, Teenage Kicks, one of the best-ever singles from the British pop-punk scene. Like I said: quirky. Check out POW!, and their latest album, Crack An Egg, here and all the photos, here.

And then the band that we've all been waiting for: Poptone. Forget the black, you should have worn white, because the show is all black light, Daniel Ash center front, all in white, sunglasses and bottle-brush hair; Diva Dompe in a long, white dress, Kevin Haskins bathed in red and green as the lights change. Opening the show with an Elvis song? Yes. Does it sound like Elvis? Not one bit! You've never heard Heartbreak Hotel like this. And then OK, This is the Pops, followed by Mirror People, and then Ash breaks out the sax for Movement of Fear... and we have a show!

Check out the full setlist here: a wonderful, diverse selection from Tones on Tail, Love & Rockets, one Bauhaus, a David Bowie, an Elvis... yep, you should have been here.

All the songs are highlights, but for me, An American Dream--Love & Rockets--the killer. Heavier than the original, and then leading into Christian Says (Tones on Tail). Powerful.

Poptone have a unique and special way of touring; a couple of weeks on the road, and then a few days off, back home. Check all the dates here, on Poptone's Facebook page.

I'm texting updates to Jade throughout the evening. She reminds me that she interviewed Kevin Haskins in New York in 2005 (here's the story, and the interview). One of the things that's not included in the interview is the discussion that they had about the British punk scene, with Kevin knowing the band that Jade's dad roadied for, The Janitors. Sometimes this planet is so small, and so huge, all you can do is listen to the music. And if you can catch one of the Poptone gigs, do.

For all the Poptone photos, go to the gallery: http://www.alisontoon.com/-/galleries/music/poptone  And if you are a Bauhaus fan, you might also like this story about Peter Murphy's latest show in Sacramento.

Posted by Alison Toon Photographer at 10:38 AM No comments:

Aftershock lineup announced! It's going to be HUGEHUGEHUGE!!!!

Today, Danny Wimmer Presents announced the lineup for this year's Aftershock Festival, being held once again at Sacramento's Discovery Park. Mark the dates: October 21st and 22nd.... and what a lineup!!!

Nine Inch Nails, Ozzy Osbourne (with Zakk Wylde), A Perfect Circle, Five Finger Death Punch, Stone Sour, Marilyn Manson, Gojira... and so many, many more. It's going to be HUGE!!!!

Posted by Alison Toon Photographer at 12:04 PM No comments: