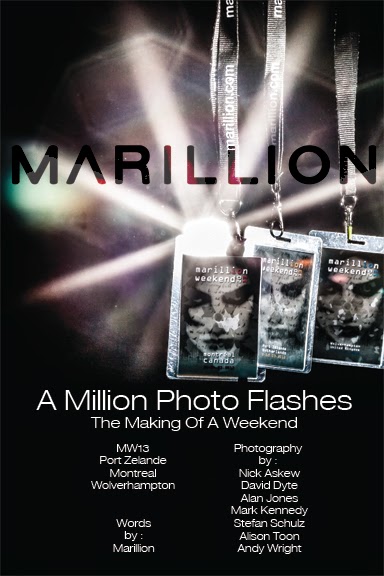 And it's all about the music, the musicians and performers, the lights... because all the photographer does is catches a flash of the light shining from the sound and soul on the stage. This book shares quite a few such moments from three wonderful weekends of music, headlined by Marillion, enjoyed by fans who travel from around the world to participate.

The 2015 Marillion weekends are coming soon... will you be there?

Can you guess how many photos seven photographers can take during three weekends of their favourite band's shows? I guess you'll just have to buy the book to find out! On sale at all three weekends, and then online later this year.

Get your copy of this book at one of the weekends...  I'll be at PZ and Wolverhampton. See you there!
Posted by Alison Toon Photographer at 10:22 PM No comments:

The Last Internationale announce they're joining tour with Scott Weiland and the Wildabouts. That'll be fun.

The Last Internationale today announced they will be touring the US with Scott Weiland and his band, the Wildabouts. Not a huge set of dates, so go buy your tickets before they are all sold out. And if you haven't already, take a listen to We Will Reign.

The are also playing BottleRock in Napa. And we saw them here in Sacramento at Aftershock last year.

Which reminds me... Scott Weiland... last time I saw him, he was still with Stone Temple Pilots, at Aftershock 2012,

Which reminds me... isn't it time that the Aftershock dates are announced? Right now I have the whole of September blocked off, just-in-case. Right?

Posted by Alison Toon Photographer at 6:31 PM No comments:

More pictures from the Hellyeah Blood For Blood tour: Archer, Like a Storm, Devour The Day

Apart from Like a Storm, who had a tiny-little-bit more light, the entire evening was rather... dark. From a photographer's point-of-view, that is. As mentioned earlier in the Hellyeah review, better just to watch and listen to the show, and have fun that worry about the photos!

The evening began with Archer, a three-man rock band from Santa Cruz, definitely a Megadeth influence there, and maybe a little Steve Vai

Next up were Like a Storm, the three Brooks brothers, all the way from New Zealand, performing mostly covers... and a didgeridoo. I couldn't quite believe it--two didgeridoos in one week, in Northern California. Go figure.

Main support act put on a rocking show--Devour The Day,  Very enjoyable and worth seeing.

To see more photos from each of these bands, click on the image to go to the Toon's Tunes galleries. And also see HELLYEAH: Blood For Blood at the Ace of Spades
Posted by Alison Toon Photographer at 6:00 PM No comments:

Check out Beware of Darkness' new mixtape/EP, Sanctuary Season. You can also buy it on iTunes now.

A little more electro than Orthodox, but still with the haunting Nicolaides vocals--especially A Stranger Saved My Life--and with a couple of fun voicemails thrown in for good measure. Kyle, roll up the cables next time, OK?


Posted by Alison Toon Photographer at 2:32 PM No comments:

Yes, I can die happy now. But not just yet. Want to do that a few times more, yet. See and hear Hozier, live, in concert.

This guy is for real. His music is timeless, his voice... soulful. Blending blues, soul, Irish ballad, folk... Hozier is here to stay. Humble and brave and can I hear some more, please? I see a lot of musicians who put on good shows. There are very few who are absolute standouts. Hozier is.

Backed by a band of very talented musicians and singers, a beautiful light show, and sound levels that were spot on, allowing the clarity of Hozier's voice to ring out.

"Jackie and Wilson", "Someone New", so many beautiful songs from the self-titled album, "Hozier"... many performers hold back their biggest hit until an encore, but Hozier completed the main set with "Take Me To Church", beautifully arranged... and then came back for a four-song encore.

The show was sold out months ago, way before most people knew he was even touring the USA: nothing to do with the Grammies performance, but the Grammies can only have boosted demand for last-minute tickets. There was not one single ticket available on StubHub yesterday--I checked. Craigslist only had ads from people desperate to buy a ticket. Doors opened at 7 pm, and there was a line about a mile long, winding around to S street, waiting to go inside the Ace of Spades. Future dates on this tour are sold out. You might want to grab a ticket for the recently-announced dates later in the summer, before they are all gone too. They are like gold, and they deserve to be.

What more can I say? Hozier just raised the bar for performances... you CAN have a well-lit, beautifully-sounding show on tour. I'm not mad. It's true--he proved it, last night. (And at the end of the show, Andrew Hozier-Byrne thanked everyone on his team... all the musicians, the light guys, the sound guys, PR and management... and on behalf of everyone at the show last night, I say thank you, too!)

Want to hear more? Buy the album, "Hozier". Check out the video from the Grammies. See if you can beg, borrow or steal a ticket from one of the other dates on the tour--this was just the beginning.

Anyone who knows me will know how much I was itching to shoot this show. I hope that one day soon, I have the opportunity to photograph a Hozier show. I promise to do it justice.

Thank you, Hozier. Come back to Sacramento soon. We miss you already. There might be a road trip in my future...

(Oh and tour organizers? That's how it should be. One support act to set the scene, and the main star of the evening, with a full-length, wonderful performance. And then everyone goes home happy at a decent time of night. And they buy loads of merch. Yes, that's the way to do it.)

(How did I first hear Hozier? By following a YouTube path when listening to Rag'N'Bone man... if you like Hozier, you may enjoy him too.)
Posted by Alison Toon Photographer at 7:25 AM No comments:

And this is plain awesome... Hozier and Annie Lennox

In case you missed the Grammies (if, like me, you were at the Hellyeah show), then I'm sharing this here. This would have been my own Grammies; highlight. While I enjoy Sam Smith's music and song, this young man, Hozier, has something timeless... and with Annie? Wow...

(See this review for why I so would like to see Annie Lennox live again. It's been far to long! Must be at least XX years since a night way-back-when at Leicester's De Montfort Hall... sigh.)

Reminder: Hozier plays the Ace of Spades tomorrow night, 11th February. If you don't have a ticket, you might get lucky somehow... radio station giveaways? Expensive resale ticket? But that would be very, very lucky. The show has been sold out, for months.

You might just have to make do with this video. Put it on repeat. Real voices. Real songs. I love it. Oh and don't forget to check out Annie Lennox's album, Nostalgia.
Posted by Alison Toon Photographer at 6:29 PM No comments:

HELLYEAH: Blood for Blood at the Ace of Spades, 8th February

We could have stayed home and watched the Grammies, but we preferred to go to the Ace of Spades. fill it with humanity, and see a great night of rock, instead. Because we all know how much rock there is at the Grammies, right? And because... Sacramento loves Hellyeah!


Headliners-superband Hellyeah stole the show. Vinnie Paul, he of Pantera, standing and waving to the crowd from behind his raised drum kit. Tom Maxwell of Nothingface on guitar; Kyle Sanders on bass, and of course, Mudvayne and Hellyeah frontman, Chad Gray.

But this is more than a sum of parts, previous experience, other bands... this is Hellyeah, and unique, and a great show!


This was a show to watch from the back of the room, on the balcony, to see the full light show and audience interaction. The crowd moved as one, like an ocean of Chad's extended family.

Catch Hellyeah's tour throughout the USA--and at Download, Castle Donnington, UK too! Go see them! You'll have fun!!!
Posted by Alison Toon Photographer at 12:13 PM No comments:

I preface this review with the fact that, much as I really wanted to see Otep again, by ten PM on Thursday the 'flu, a migraine, and three weeks of non-stop travel caught up with me with a vengeance... and rather than hide out in the bathroom at the Boardwalk, I went home to feel ill in private. So... I didn't get to see Otep, nor the final support act Terror Universal. Next time. (And next time, hopefully before 11 pm on a weekday-workday-evening...

Opening the evening's show was local band Zeroclient, and these guys get better each time I see them. They are working it... look out for them.

Then Downfall 2012. These guys are something else... three-man, multi-instrumentalist band, drums, bass, guitar, vocals, home-made percussion from all sorts of containers... and a didgeridoo. Yep. They were fun, entertaining, musical and yes, I'd go see them again. Hailing from Houston, Texas, you can find out more about Downfall 2012 on Facebook and on FeedTheMuse.

Here's an example of their music, official video (it starts really quiet... wait for it!):


And then Thira... always a good show, the steampunk-rockers are visually-intriguing, very energetic, and fun to watch.

Click on any of the photos above to see the full Toon's Tunes photo galleries!

Posted by Alison Toon Photographer at 2:32 PM No comments:

And the Sammie nominees are....

The Sammies are SN&R (Sacramento News and Review)'s annual celebration of local music talent, and this year's nominees are all listed here on http://newsreview.com

Nominees include Zeroclient (on stage tonight at The Boardwalk),  and many, many, MANY more, in all music categories ranging from metal to jazz. Cast your votes!!!

(I wonder when they'll add a category for music photographers, writers/reviewers, promotors, managers, and more???)

Posted by Alison Toon Photographer at 1:06 PM No comments: