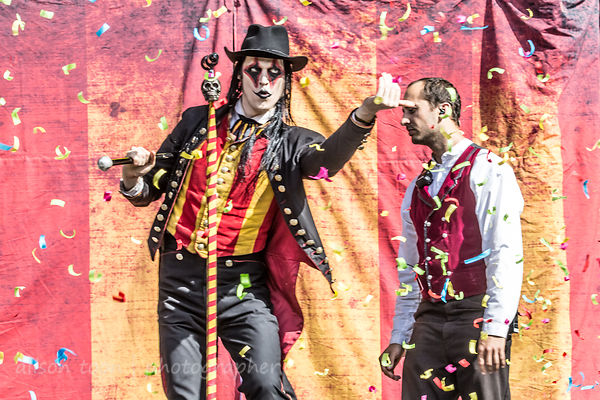 I am jealous. I would love to be at this show. Avatar is in town!!!

You'll have a wonderful time... did you get a ticket? Here's where to check in case there are any left on the Ace of Spades' website.

I want to hear all about it...

(Photo gallery from Avatar's show at Aftershock, Sacramento, 2016 is here.)
Posted by Alison Toon Photographer at 1:59 PM No comments: Links to this post

One of my favourite Sacramento bands--and there is a lot of excellent music in this town--Zeroclient, will be releasing a new album, their second, in 2018. Here's a preview... with a very cool video:

Posted by Alison Toon Photographer at 9:10 PM No comments: Links to this post

It's been pretty quiet around town since Aftershock in late October, metal/hard rock-wise, which left me time to sort out "other stuff" (see later), take a little time away from the camera (sometimes we have to do that), apart from family photo sessions and non-concert photography... but heck, look at what the new year has lined up for Sacramento! Hard rock, metal, and some big names in pop.

At the Ace of Spades:

At Golden One:
At the Memorial Auditorium:

I'd love to see all of these shows!!! If you haven't already, buy tickets ASAP because many of these will be sold-out shows.

Avatar, Pop Evil, Nothing More and Ministry would be right at the top of my DO NOT MISS list.

But... and this is the "but" from the title of this post... Most likely, I won't be here in Sacramento for these shows! (Though it's SO VERY TEMPTING.)

It's time for my next adventure. I sold my house here the day after Christmas. I even sold my lovely, red truck, which made me shed a tear, last week. Everything is sorted: I'm headed back to Europe, at least for a while; not sure to exactly where yet--that's part of the adventure--but I have a need to go back to my roots, and to leave the USA for a while.

If you follow my social media posts, you'll know my opinions on the way this country is heading, politically and socially, and... it's just time to go explore somewhere else and to take a break from what's happening here. (It won't make me silent--probably the opposite, when the comparisons start settling in.)

I'm not leaving because of Trump; I'm leaving because Trump is not the problem, he is simply and quite terribly the most-visible symptom of a chronic and dangerous disease. Like a meningitis rash. Like a nasty and unrelenting cough.

I'm very lucky and I know it; I have the right, and the privilege, that enables me to do this, to decide to up and leave, and still have the option to return at whim. With both a USA and a UK passport in my pocket, and a little money in my bank account, I can do this. I don't this lightly, nor do I expect the grass to be magically greener on the other side of the pond. But... I have to find out. And so, the bags and the cameras are all packed and ready to go.

I will be back; I have precious family and friends here in Sacramento and around the country. It might be sooner, it might be later. It will certainly be for regular visits, for tours, shows and festivals.

Just expect the next posts to be written and photographed from somewhere other than Sacramento, USA!

See you at the next show!

Posted by Alison Toon Photographer at 5:27 PM No comments: Links to this post