George Clinton and Parliament Funkadelic at the Ace of Spades just blew me away... funny, raucous, irreverend, rude/crude, cheeky, sexy, naughty... but above all, musical, truly musical. Every person up on that stage--and there were so many of them, it was like a game of sardines and guess as to who'd fall off the edge, first--each and every one was making a strong, unique, musical contribution.

Together: a storm of funk, an ocean funkadelic. Sir Nose (Carlos McMurray)  strutting and performing and climbing. So much going on on the stage at any one time! Guitarists and singers and dancers, playing with, and to, the audience--and having so much fun it flowed over into the room, into the street; a tide of music and fun.

And king of it all, Mr. George Clinton himself. 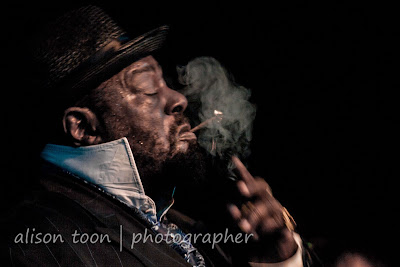 He carries a lot of musical history, and he wears it very well indeed--like the beautifully-tailored outfit he wore for the show. No psychadelic hairdo or beard tonight, but a very-smart head-of-the-family gentleman with a funky sense of humour.

I was lucky enough to see James Brown, back-in-the-day, in France, when he performed at Vienne Jazz festival, in a Roman amphitheatre.  (And yes, that was me, I wrote that under the pen-name Ali Sinclair: first name's Alison, middle name's Claire, gettit?)  Now I've seen George Clinton, in a downtown music venue with black walls and with people who lined up around the block to party with him. I am so glad to have been there, both times. 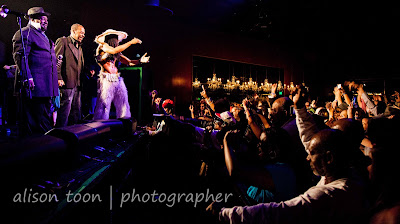 These guys built the foundation to which so many of today's performers anchor themselves--and Mr. Clinton is still here, still rocking, and he still rules.

What a show, George! What a party! When can we do it again?

Urban wildflowers, a set on Flickr.
In the green-belt woods behind the house, or on a verge next to a busy street, wildflowers appear each year and make the world a prettier place.

Bright orange California poppies reflect the sun as traffic speeds past; and pungent, white bells of wild garlic are a pretty cloud under the trees by the creek. Spring is really here now.
Posted by Alison Toon Photographer at 6:51 PM No comments: