For more info, see http://marillion.com
(And for Marillion at the Fillmore... yes of course, we were there!)


Posted by Alison Toon Photographer at 8:06 PM No comments: 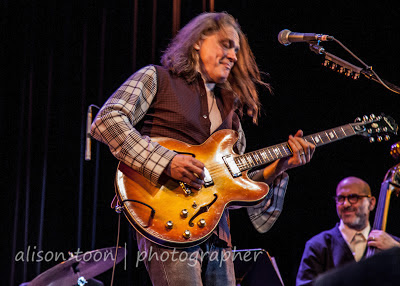 Having heard a little, but not a lot, of Robben Ford'a music over the years, and never having had the chance to see him live, I was looking forwards to the show at Sacramento City College's Performing Arts Center. It was also an opportunity to check out a new venue: more and more of the region's colleges are opening up their Arts centers to public shows. Dr. John performed here a couple of weeks ago: I missed it as the Wailers were in town. This show was organized by SBL Entertainment   who are doing a good job bringing new, and old, favourites to Sacramento and Northern California.

I went to the show with some preconceptions: I was expecting guitar virtuoso, Vai-esque, but more bluesy. And I somehow expected the audience to be like Steve Vai's: some oldsters like me, but with lots and lots of young guitar enthusiasts. That preconception was blown away immediately: Robben's audience was way more mature; young people were the exception rather than the rule. Definitely a jazz crowd, rather than rock-and-roll. 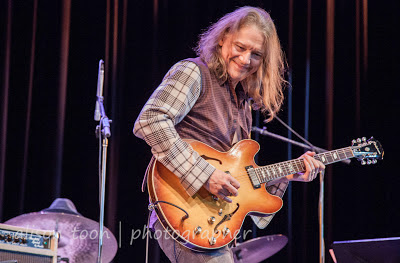 The theatre is a real theatre: professional lighting and sound systems, sky-high gantries with spotlights, stepped seating (with weird seat numbers: odd seats are on one side of the house, even seats are on the other, so don't be surprised if you buy two seats together and find they are a number apart). Seating is really comfy. Like being at a concert while in your own armchair. (Don't know what happens when you want to dance, though.)

Robben comes across as shy, gentle... and when he goes off on that guitar, boy does he rock. But that wasn't all the show was about: his new album, released this week, "Bringing it Back Home", includes Hammond organ, upright bass, drums and... trombone?  Yes, trombone! So it's blues and it's Dixie and it's more blues and it's New Orleans jazz, all stirred into a mix until you can't separate the jazz from the blues. Part way through the show, "Louisiana Blues, New Orleans Blues?" was threading through my thoughts, and that's how it felt: like a New Orleans jazz band playing the blues. With some rockin' guitar thrown in now and again.

"Fool's Paradise", also from the new album, is pure, smooth, jazz... it's quite beautiful, and the song that you expect to be playing on the radio at 2.30 in the morning. 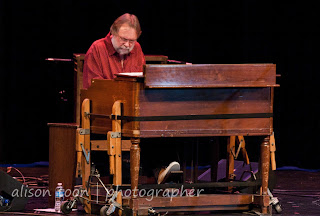 My favourite of the evening, however, was from an earlier album: "Nothing to Nobody", from the 1999 album, "Supernatural".

Posted by Alison Toon Photographer at 6:51 PM No comments:

Almond trees along the street are budding, ready to burst into clouds of soft white. There are sticky buds on the hydrangeas, and daffodil buds, and pointy tulip leaves nosing their way up. One hellebore already has a nodding, dusky-pink flower. The little peach tree and twig-like pear tree both have infant flower buds, and the earth is moist, workable.

Today I moved some of last-year's garden compost, sweet and friable, to the vegetable garden, and planted more broad (fava) beans for a second crop, and some baby romaine/cos lettuce, hoping that the turkeys won't want salad (that may be a forlorn hope; I've put lots of sticks around them to prod Mr Lurkey in the chest if he tries to eat them... we'll see).
Posted by Alison Toon Photographer at 6:56 PM No comments:

The Green performing at the Ace of Spades, Sacramento: 13th February 2013

And now... reggae from Hawaii! Obviously have quite a few fans in the Sacramento area; lots of young adoring fans crushed up towards the stage, enjoying the show.

Posted by Alison Toon Photographer at 8:05 PM No comments:

Good, family-style reggae from Brooklyn, New York. They had driven cross-country to the West coast and to Sacramento, touring with The Green; New Kingston put on a good, fun show, solid music, very entertaining--you can tell it's their passion, it's written all over at least one of them literally, and when the band enjoys what they do, it's contagious. I think we'll be hearing more from them!

More photos in the gallery: http://alisontoon.com/newkingston
Posted by Alison Toon Photographer at 7:33 PM No comments: