I've been in Europe for several weekends now, to photograph and to enjoy the three European Marillion weekends... and I'm taking advantage of the time over here to revisit old haunts and to explore places I've never been. (Whether it's a journey of musical journey, or moving through life in general, we have to keep on learning and venturing into new domains. IMHO.)

The first Marillion Weekend of 2017 happened in Port Zelande, The Netherlands, and you can find the review and photo galleries here. The Port Zelande event is something that every Marillion fan should make their way to at least once in a lifetime. A bit like this place.

After that weekend, I whiled away a few days in Dordrecht, a beautiful, old city in the Netherlands. Years back, I'd spent three years in Apeldoorn, further north and east, and this was the first time I'd explored this part of the Netherlands. Tilting at windmills, searching for tulips, watching the water. Beautiful place.

Then off to Poland. The first time I ever visited Poland, it was with my then-husband, visiting his family in a little village near Malbork, where there were still horse-drawn ploughs and a steam train or two. We travelled on a rickety train from the Netherlands, passing through multiple checkpoints, slammed with passengers and TVs and goods from East Berlin to Poznań, where we passed our suitcases through the train window, and the children over the heads of other passengers. It was the year before the Berlin Wall fell, and on subsequent trips I've seen first, an overdose of commercialism, and now, today: a truly beautiful and proud country that has really found herself.

The restoration work on the buildings of Warszawa and Gdansk, and the huge, mighty castle in Malbork, are wonderful examples of how a country's architectural heritage can shine. The way that McDonalds is present but in a very, very subtle way on the main shopping street in Łódź is an example of how globalization doesn't have to overpower local businesses. The new (war, holocaust, resistance, deportation, history of Poland) museums in Warszawa, and in Gdansk, are stunning, breathtaking, devastating and heartbreaking, and so very well presented that they each deserve a day, and a revisit, and should be mandatory experiences for all. Poland you have a very special place in my heart... I'll be back.

And now I'm in North Norfolk, England, a place of so many happy memories, and so much natural beauty, that I never want to leave again. Why did I ever leave?

Next weekend: it's Marillion, in Leicester, my home town, and at the De Montfort Hall, location of much misspent youth. So many Budgie concerts! So many other shows! Dr. Feelgood, with Wilko strutting about on the orchestra/choir steps! Doctor Hook even! I watched pantomimes there, as a kid, was introduced to opera there by my aunt and uncle, and even performed on stage as part of a Leicestershire kid's orchestra. So next weekend? It will be awesome.

Posted by Alison Toon Photographer at 1:20 AM No comments:

And Aftershock is back at Discovery Park in Sacramento again this year! The weekend of 21st and 22nd October. Click the link to find out more about tickets and to book a hotel if you need one. There are several within walking distance of the event!

Who are you hoping for in the lineup this year? Follow the festival on Facebook to make sure you see all the announcements!

If you don't remember how much fun you had at Aftershock last year, take a look here:

Posted by Alison Toon Photographer at 12:31 AM No comments:

If you like your rock a little prog, or your prog a little metal... check out Tides From Nebula 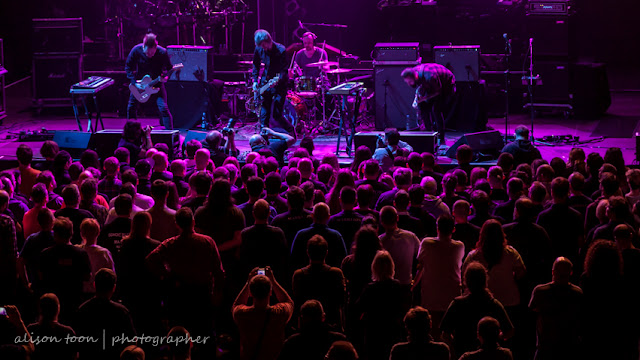 Post-rock, instrumental rockers Tides From Nebula are from Warsaw (Warszawa, Poland) are well worth a listen if you like your metal on the progressive side, or your prog with a metal/rock edge. This instrumental band opened for Marillion recently at the Klub Wytwórnia in Łódź, Poland, and I found them hypnotic, mesmerising, complex and intense. 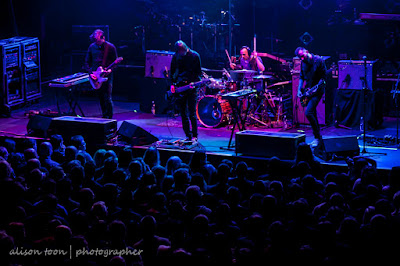 Find more info on Tides From Nebula on Facebook. They are currently on tour in Europe: find tour dates here!


Posted by Alison Toon Photographer at 12:13 PM No comments:

Every two years, the phenomenon called "Marillion Weekends" happens. Weekends-- with shows on Friday, Saturday and Sunday--in several different locations around the world. This year, 2017, in Port Zelande, The Netherlands; in Lodz, Poland; in Leicester, England; and in Santiago, Chile. The Port Zelande (PZ)weekend sold out almost immediately, Leicester too is now sold out, but if you're lucky, you might still be able to get hold of a ticket for Lodz or Santiago today, and if you don't wait much longer.

So what exactly is a Marillion Weekend? It's the coming-together of fans from all around the world--yes, they'll travel from Brazil and from Australia for a weekend in The Netherlands--plus Marillion playing long shows on each of the three evenings, combined with a wonderful light show (huge shout-out to lighting from Yenz Nyholm); plus a good variety of support acts, and at Port Zelande, because everyone is staying in the same place, there are additional activities such as a band trivia quiz, Q&A with the band, and much more.

Marillion has brought the Weekend to Port Zelande and the Center Parcs holiday resort six times now: for long-time fans it's a chance to get together with Marillion family from around the world, every two years. The entire holiday village is filled with people who are there for one thing: to enjoy Marillion. It's a bit like a holiday camp for grownups who like progressive rock; you get sand in your shoes, the beds are kid-size, but who cares when you're full of the music.

And once again, the band surpassed all expectations. So many times, I heard people saying how they had wondered if the band could still surprise, be better than last time, and then being blown away by what they heard and saw this weekend in Port Zelande. There are fans waiting for the three other weekends who may not wish to know the setlists from PZ, and out of respect for that I won't share the full lists here. (Those who do want to know the setlists for all three nights--go to http://setlist.fm and search for Marillion Port Zelande. That's what it's for.)

Friday night, the show was a mix of twenty or so huge, emotional songs, provoking discussions about the theme of the evening. Were they all protest songs? No...  not quite but wait... what was the connection? Maybe the connection was simply that they flowed together and worked as a show.

Saturday night included songs from F.E.A.R., Marillion's studio album from late 2016, released to unprecedented appreciation from a general public who have, at last, started to understand what all these fans from all around the world have know for so long. You have to hear Marillion. You have to see them live.  (If you haven't heard F.E.A.R. yet, take the time to listen. It is so fitting to the times we are living in.)

No doubt, there will be people who only-just discovered Marillion through F.E.A.R., and who are planning on attending the Leicester weekend. They are in for a treat.

Sunday... oh, Sunday. From the swooping open of the red velvet curtains to reveal the bewigged, be-powdered string quartet In Praise Of Folly, to guest appearances by sax and trumpet players (Phil Todd and Neil Yates) and an obviously-beloved lyricist John Helmer (wrote lyrics for Marillion for several songs over the years, including Pour My Love on Sounds That Can't Be Made), to vocalist Steve Hogarth's sudden-and-unintended-and-must-have-been-painful disappearance down a hole the back of the stage, through the long silence while audience, band and crew alike waited to hear that he was OK (he was, and he was back on stage ten minutes later), to the beautiful, confetti-filled finale... that was one big wonderful weekend.

The days after a Marillion Weekend are like a black hole where all fans want to do is turn the clock back to last Thursday, and start all over again. You're picking up the pieces and trying to get back to mundane, boring-tawdry "real" life, but talking the hind leg off friends and family, telling those who weren't there why they should have been, reminding those who were there what you saw, did, heard together; congretating in Facebook groups, watching the 'family' on their way back to their many homelands,

Photos from Alison Toon Photographer are now up in the galleries:

Photo galleries for the support bands will be added soon.

See you in Lodz!


Posted by Alison Toon Photographer at 11:14 AM No comments:

The March-April European tour: the days between the (Marillion) weekends!

Yes, Alison Toon Photographer is on the road/in the plane/on the train/on the bus, again! In Europe until early May to cover all three European Marillion Weekends. Taking some time to see the sights, too: this week, it's been the Netherlands.

I lived in The Netherlands for three years, many years ago, and it's been so nice to come back here and get to know the country all over again, It's a wonderful place.

Tomorrow I catch a flight to Warszawa, Poland, to meet up with friends for a quick trip around the country before the Marillion weekend in Lodz. (I almost changed my flight for a train ticket, but found out that the sleeper that used to run all the way from Amsterdam to Warszawa doesn't run anymore... that's a shame, it was fun... but that's another story.)

More photos from my travels in The Netherlands are here; more will be added!

So for the next few weeks, you'll see travel posts interspersed with the music posts. First Marillion weekend review coming up very soon!
Posted by Alison Toon Photographer at 8:48 AM No comments: