Newsted, performing at the Ace of Spades, Sacramento CA, on April 27th2013.

Always good to see someone return to what they love after a serious injury or other life-changing event. Jason Newsted is an incredibly expressive musician, and he has fans who have followed him through all his musical incarnations to the latest--Newsted, whose lineup includes Staind's Mike Mushok, drummer Jesus Mendez Jr. and guitarist Jessie Farnsworth. New EP "Metal" is available--and it's metal all the way.
More photos here:  Newsted, April 27th 2013.,

Photographer (and hi-res photos): alisontoon.com
Posted by Alison Toon Photographer at 7:52 AM No comments:

I owe you reviews:

Will deliver this weekend. Too much work to catch up on before then.

In the meantime.... here's the photo collection: please feel free to add comments to your favourites!

Last weekend in Wolverhampton was one of the most intense imaginable... three major shows by my favourite band, Marillion, and yours-truly had a photo pass. You don't want to know how many photos I took. Seriously. And then had to sort and edit and reduce and run-away-from and then come-back-to and decide which ones to cull (am still failing at that--I may ask for your help).

So how the heck does a photographer do that, each and every night during an international tour, and be backstage, and be with the musicians throughout the tour, on the road and in the bus, and look after the excited fans wanting meet-and-greet photos too, and be a really nice guy about it all?
Meet Andy Wright, the photographer behind the new book, "9:30 to Fillmore, Photograpic Memories (USA & Canada 2012) Words by Marillion, Images by Andy Wright". 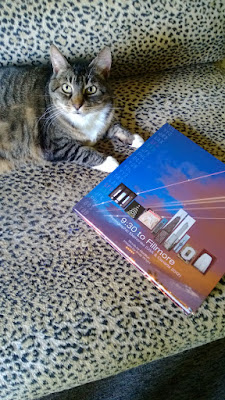 The book takes you, day by day, through Marillion's tour last summer. It's much more than concert photos; it's intimate snippets of life on tour; it's coffee and falling-asleep in the dressing room, it's posed and it's candid and it's discreet and it's rock, it's breaking down a set after a show and down the stairs and into the bus and on the road again, again: it's early-morning runs and soundchecks and ironing shirts, and it's setlists and diners and fast food and chat shows, and Washington DC and two nights in New York and Philadelphia and Boston and Quebec and Montreal and Toronto and two nights in Chicago and two nights in Los Angeles and, finally, the Fillmore in San Francisco.

If you were at any of these shows, you'll want a copy. If you were not at these shows, you will want to see what you missed. If you're a fan, you'll enjoy the insight into the life of the band. If you've wondered about life on the road while still working on your upcoming album... or if you just like music and have not--yet--listened to Marillion, well it's about time you did. Seriously dude.

The book is the same wonderful square of a precious vinyl record, just thicker. Solid and hefty and precious. Will fit on the shelf between Brave and Marbles. Once I've finished looking at it. Like maybe next year?

(While many may dream of following their musical heros around the planet, taking photos, getting in the band's hair, I'm not sure that many could live that nomad life for long. his book, and Marillion themselves, are examples of how to do it... and do it right.)

I bought my copy from the merch stand on Friday at the Wolverhampton weekend. It should soon be available from Racket Records, Marillion's store, if it's not already.

(I love the shot of the man in the mirror... had to do a double-take. You'll understand when you see it.)

A week ago today, I was in Wolverhampton, England; part-way through a wonderful, wonderful Marillion weekend, with the best band and the best fans in the world, in the company of my best friend from schooldays, in the country where I was born.  And then suddenly, I'm back home; the garden weeds have grown neck-high, the roses and irises are all in full bloom, the trees are green, the cat is miaouwing and sharpening her claws,  I have a million photos to look at and choose from and sort and discard, the kids are here but no-one is awake so I don't want to start the noisy strimmer at seven in the morning just-because I'm still on British time and so should you be too, nor put on Marillion songs full-blast just to remember and wake everyone in the mean time, mean time yes that would be mean...

Think I'll take a drive to the garden center/centre. Back later with something meaningful ;-)
Posted by Alison Toon Photographer at 9:00 AM No comments:

Soul Asylum, Ace of Spades, Sacramento; 6th April 2013, a set on Flickr.
The room was not-so-far from empty; bar area full, a few rows of people standing, others around the edge or sitting on the sofas by the back wall.

I wondered why... surely, many more still had "Runaway Train" somewhere, in the back of their heads, playing on repeat. Or was it just me?

The first few numbers of the set, and I wasn't so sure that the people who had stayed-away had made the right decision. The songs seemed disjointed, forgotten, as if no-one knew exactly where they were, or even what day or town it was. Playing to an almost-empty room might do that to you.

But then they played Black Gold. A "fracking Fracking song, about fracking Fracking". And everything changed, and everything came together, and suddenly the audience seemed to have swollen and grown, and everyone was cheering and happy. Dave Pirner's vocals became stronger, and he more articulate, and String of Pearls was a gem, and Pirner's a poet. It no longer mattered that the audience was small: the band was one with the people. Pirner joked and teased the intros for the best-loved songs... Runaway Train he wrote, yesterday, after seeing a lot of railway tracks. He must have been to Roseville. Right?