Time and Place. We had the time: Tony had the place

On the Thursday of our week in Jamaica, we went to Time'N'Place. And it was beautiful. 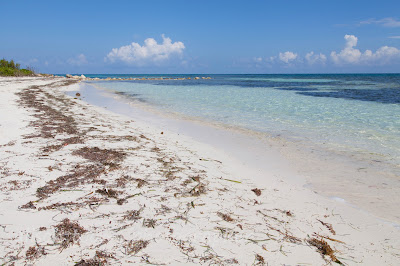 Imagine a desert island, a beach from "Lost", with hand-built cabins and beach chairs, plus food and drinks if you want them, a few friendly dogs, infinite turquoise sea, blue skies, sun, gentle waves; Bob Marley singing in the background. That's Time'N'Place. Just east of Falmouth, hidden away on the coast.

(There is a "clothing optional" beach right next door, but we'll ignore that and try not to stare at the fat white naked men parading up the little pier to the shower.)

We arrived quite early in the day and the beach was quite empty. So peaceful. I became quite fascinated by the tripod structure in the sand, holding a worn-out hammock which dangled on the sand. A random, artistic sculpture that fit perfectly with the dreamy atmosphere of the place. 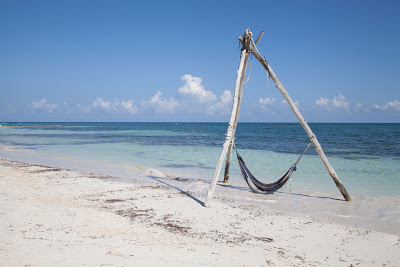 A fisherman arrived with his catch of the day, spear-fished; red snapper, a squid and a blue parrot fish. 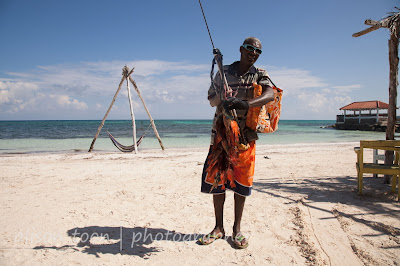 A couple more people arrived, quietly; they mentioned to me that they were from a cruise ship, and that about fifty more people were on their way. They had a peaceful, quiet thirty minutes before the crowd arrived, together with organizers who announced that there would be buses or taxis back to the beach on the hour, every hour, from 1 pm, and there would be lunch for those who wanted it.

Darn these boat people; how dare they arrive and trample all through our quiet, peaceful day?

"My chocolate is melting." (Who brings chocolate to the beach, 80 degrees Fareheit or more.)

"Because I can't stand sand between my toes!" (Then why the heck walk on a beach? Without sandals? Why come to the beach in the first place???  Grrr.....) 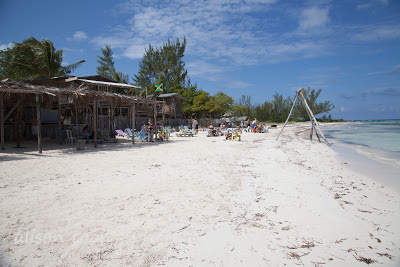 After a while, they settled down; I noticed that not all cruise people were brash and noisy and flabby-white: some sat quietly on the sand, sipping a bottle of Red Stripe. But most were neither quiet nor polite; they didn't say please or thank you, they shouted instead of talking, and I pictured them on an old-fashioned comic seaside postcard, not on a tranquil, peaceful beach like Time'N'Place.

"What fish did I just eat?" (As if the staff could identify the fish from its bones. At least the visitor enjoyed it, even if they didn't know if it was the snapper or the blue parrot fish.)

Hour by hour, the boat people headed back to the cruise, or to places more touristy for souvenirs, to prepare for a few hours on another island the next day, or two days back to Fort Lauderdale. And the beach became peaceful again. 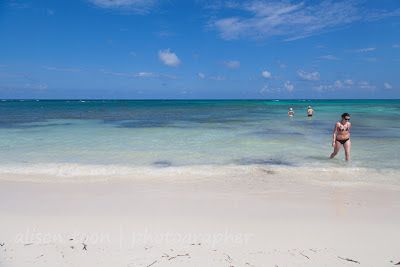 Tony made us laugh. He'd thought we'd missed our boat, until we explained where we were staying, in Greenwood, at Emerald View. He gave us a tour of the cabins. He built them all himself. You can stay in your own little paradise, waking to the sound of gentle waves; walk on the beach at dawn, or dusk. Enjoy the bonfire in the early-falling night. Drink coconut milk from a nut picked fresh from the tree.

We stayed until dusk began to fall. One day, I'd love to stay in this heavenly place.