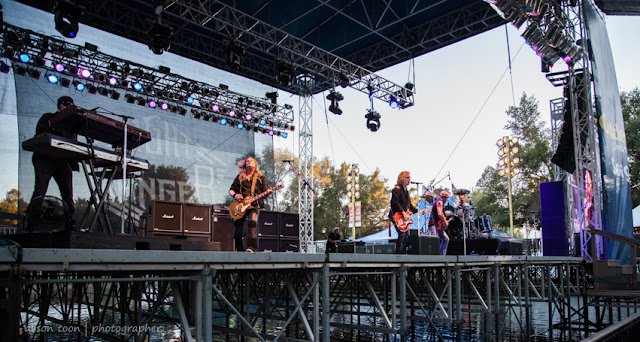 If there were a competition for the Happiest Rock Band On Stage This Week, these guys would have won it. Hands down. Take a look at the photos: happy, happy, happy! Big grins! On the faces of the crowd of fans, too. And that's what the State Fair is all about, right? Big fun!  (Yes, that is water under the stage: this is the Golden One concert stage, free concerts every night of the fair. You can buy tickets for premier seating at some of the shows, closest to the stage, as many people did for Night Ranger, but all the shows are free with admission to the fair.)

I wanted to see Night Ranger because, while I had never heard them until seeing their name on the State Fair's website, everyone I mentioned their name to here in Sacramento grinned, and said, "Night Ranger! You don't know them?" No, I had to admit: no, I don't.

Made me wonder why there are some bands who make it big here in the USA, but who don't make a ripple in England. And vice-versa: major stars "over there", but never here. Why some become global heros... and some are huge in their own country, but nowhere else. Is there something very culturally-specific within their music that makes it a magnet for locals only? 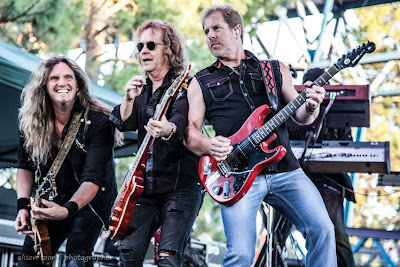 Forgive me, America, but I don't know Heart's music, either. Nor Journey's. All good musicians; all relatively-unknown in the UK. At least, when I was growing up there. And I guess that the UK-in-the-1980's years and ears were filled with other sounds: lots of heavy metal; The Cure, Sisters of Mercy, Joy Division, The Smiths, the Eurythmics, Marillion, two-tone ska, post-punk-whatever-it-may-be... you get the idea. So no, I hadn't heard Night Ranger before. Even though Brad Gillis toured, worldwide, with Ozzy in 1982. (Mind you... when looking at this video, I might not have seen Brad but would have been transfixed by how ... OMG ... Ozzy looks! I would definitely have noticed the guitar work though!!! Ozzy... you really went on stage like that???) 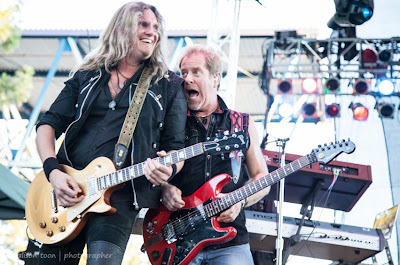 "Sister Christiane" definitely sounded familiar... but could I pick it out and name the artist, everyone in the band, the year it was recorded? Nope. Not in a million years. Same with Heart and Journey, all but a couple of Boston's songs, and all but one of Chicago's albums (because someone close to me had Chicago in their vinyl collection.) 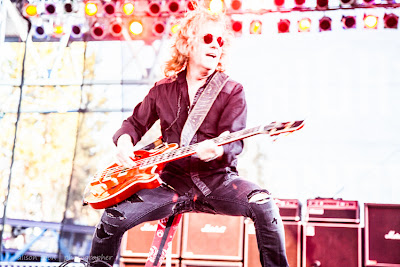 The band, America, however, of course! (But they made it big in England before their homeland.) That's the other side of the coin: Calvin Russell was a hero in France, yet little-known in his native Texas.

So what is the key? What is that magic connection in the musician's work, and the listener's psyche, that links the two? 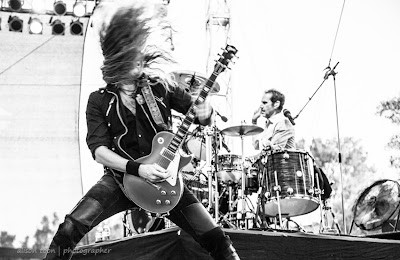 It's not just exposure: there are bands who have come to the USA from Europe and vice-versa, whose music is huge on one side of the Atlantic; it's heard on the radio, live on tour, and still... it just doesn't click. Another example: Slade, my heros when I was many years younger... huge in the UK. Top of the charts, straight in at number one, year-after-year. Glam rock pioneers. They toured here.

So if you have a clue to what this all means, please let me know. 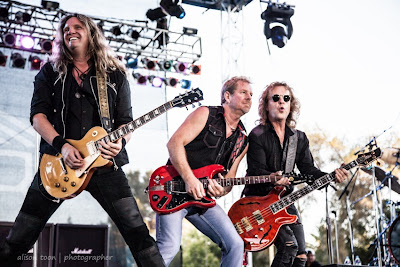 In the meantime, look out for Night Ranger's concerts. They put on a fun and rocking show. Enjoy it!

Many more photos in the Night Ranger set on Flickr: click to see them. (If you're the guy who wanted his picture taken--that's where you'll find it!)