So here we are... the day after. Three days of wonderful fun and music at Chicago Open Air, at Toyota Park in Bridgeview, Ilinois, just down the road from Chicago's Midway airport, and the first ever Chicago Open Air metal and rock festival. I have the distinct impression it won't be the last!

Toon's Tunes/Cameras and Cargos, aided-and-abbetted by partner-in-crime Andy Wright of Andy Wright Studios/DeadFly Media, was there for the entire, loud, heavy-as-a-lost-planet, exciting, exhilarating, happy weekend; check out both @alisontoonphotographer and @only1andywright on Instagram too! 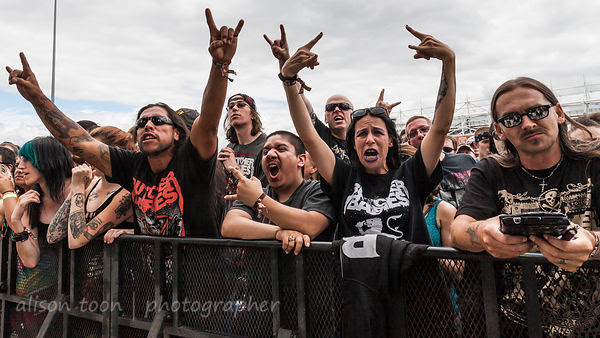 But before we get into the music photos and reviews... before the singers and guitarists, the new favourites and the ones-I'd-travel-the-world-to-see-again... you know what we do here by now. It's all about you, the People of Chicago Open Air. Because without you, my dears, there wouldn't be any festivals, there wouldn't be any fun, the bands would have no-one to play for, and life would be that much less interesting.

So let's say a huge THANK YOU to all the bands and performers from this past weekend--it was wonderful, wonderful! We'll tell more of your story shortly... 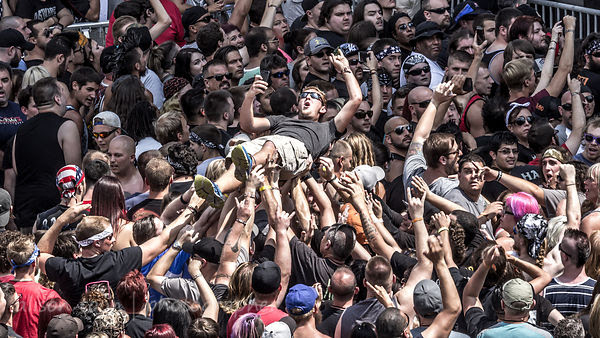 People of Chicago Open Air, you were wonderful!

You were insane, and I mean insane, crowdsurfers; not only regular festival surfers, but guys with delivery boxes, mothers with their daughters on their chests, and a team of true superheros!!! You took selfie-movies while you surfed, and you were upstaging everyone!!! And you, the team of red-shirted security, who were there to catch the surfers, every one, no matter how fast they came over that barrier, no matter if they arrived three- or four-at-a-time. You were all awesome!!!  (Sacramento: take note--CHICAGO CROWDSURFERS RULE!!! Are you going to let that one ride? Get ready for Aftershock!!!)

You were security, and you were friendly and helpful and you bounced the beachballs back into the crowd, and I saw you spraying water on the people at the front of the tens-of-thousands of people when it was really, really, hot, and scooting them out through the pit to safety if it was all too much.

You kept the festival grounds and facilities clean and tidy, and you did it with a smile, and I think you were enjoying the music, too!

You had the crazy job of climbing up the swinging, suspended jumbotron screen, to work on it, when nobody in the audience knew you were there. And you assembled and dissembled the stage lights and pyro and special effects and the stages themselves, up all night, working while the rest of us were sleeping a few hours before the next day's show.


You worked as part of the festival and you presented the performers, or you took students through the Music Experience and talked to them about the music business. You greeted the performers and made sure everything ran on track and on schedule, all except for Mr. Manson, but I guess he's his own boss and we'll leave it at that, because Ivan Moody already said his bit  ;-)

You sold the tickets and you publicized the event, and you made sure there was a stunning, yes stunning, line up for this show. And you were ready in case the storms that were threatening arrived, (and indeed, the last night of the festival finished with a huge symphony of thunder, lightning and rain).

You worked at the food trucks and hot ovens and grills, and cooked and prepared and served lots of yummy man (and woman) food. You poured us drinks and served us with water and Monster Energy and somethings-stronger, sometimes a lot stronger, and one or two of us were dancing funny, wobbly dances by the end of the day, but still came back for more the next morning, confused and dazed but ready to start all over again. 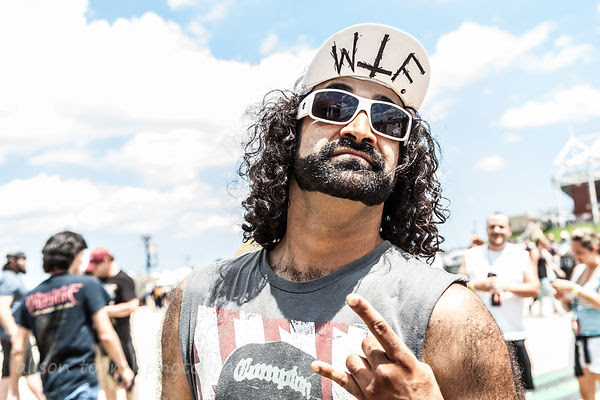 But most of all, you were there to enjoy the music, in your tens of thousands; you wore whatever the hell you felt like: from almost nothing but string to a woollen cape, superhero onesies, lederhosen, stiletto heels, Doc Martens; a banana suit, more tattoos than a Navy of sailors and enough piercings to sink their ships; beautiful dresses, camo pants, F**K YOU t-shirts and FXCK Cancer bags to support that organization's wonderful work, and you donated to Take Me Home (or bought a hug, same thing) to help rescue needy animals. 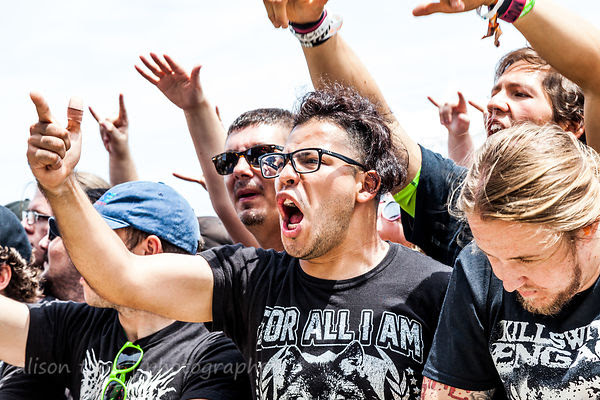 You came from Chicago (of course), but you also drove 11 hours from Kentucky and further. You came by plane from Denmark and Sweden and Japan and Canada, and like me, from California, and yes, it darn well was worth it, and yes, we'd drive all the way back there again in a heartbeat.

It was that good.

You even stood for hours, and hours, to have the chance of meeting Rammstein. Some of you in Lederhosen. I saw you. You did. You wore Lederhosen. And makeup. Came straight from the office to the festival, right?

You went from one stage to the other and back, time and again, and some of you must have identical twins or metal doppelgangers, because I saw you in the front row at both stages, and I have the photographic evidence to prove it. How the heck did you manage that???

You created a huge, live, monster of a crowd, which swirled and breathed and kept popping up and out all of those surfers, and you let at least one rock star walk upon your waters. You moved like the ocean in the night, full of metal horns and middle fingers and at least one inflatable body part (what? why???)


Oh my, People of Chicago Open Air, did you have fun? I know I did! Can we do it all over again, soon?

(People of Chicago Open Air: I think you should all come to Aftershock in Sacramento. Chicago may have raised crowdsurfing to fine art, but Sacramento is the home of the Circle Pit and the Wall of Death. Let's get some cross-pollination going! Superhero mosh pits!!! Superhero-festival-smack down!!!  Now there's an idea...)

More, many more, or rather, many, many, MANY more photos in the People of Chicago Open Air photo gallery -- click here -- and more will be added as the other photos are edited. Feel free to use the Share button, that's what it's there for (it's in the top right corner of each photo, and looks like three dots joined by two lines)

Music photos on their way very soon! Bookmark http://camerasandcargos.com, "like" our Facebook page, follow the Instagrams at the top of this story, or follow @alisontoon on Twitter for updates. And check out that photo gallery in case you find your own happy smiling face. I know you are there!