Sunday 17th July, it's evening, dusk is falling, and Five Finger Death Punch are on stage on the third day of the very first Chicago Open Air; a little late beginning, the previous act ran long... we lost the sound for a very short moment part-way through, and the stage lighting was a little timid, maybe just in contrast to the gathering thunderstorm which, thank goodness, held off; but nothing else is ever timid, sky or reserved with these guys. Not the music. Never the music. Full-bore-all-barrels-firing, Five Finger Death Punch brought the show to all the many fans who made up the huge audience.

(I've never seen Ivan Moody smile so much during a show. Take a look at the photo gallery: see what I mean? Yes, there are a lot of photos. Yes, there's a Share button. You know what to do.)

From Lift Me Up through to the band's closing song for the evening, pretty much a tradition, it was The Bleeding... we were all singing along. Complete strangers and best friends in a huge crowd, joined by the song, singing loud into each others' faces, grinning too.

Festival sets are always a condensed, best-of-radio-play selection of a band's songs; FFDP's set included Lift Me Up, Never Enough, Got Your Six, Bad Company, Jekyll and Hyde, Wrong Side of Heaven, Under and Over It, and finished with The Bleeding... which was probably the moment that melted more stone-cold metal hearts than ever before, when Ivan Moody invited young fan Chylynne on stage, who sang her heart out. Showing no fear before the huge audience--over 75,000 attended the three-day event--and it was clearly an emotional time for Ivan, and for lots of us watching. (There are several videos online now of the song, I'm sure you know how to use Google by now.) 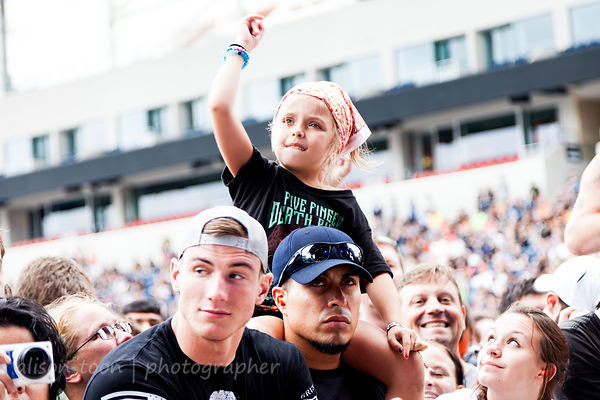 Yes, you may have seen Chylynne before, if you were at Rock on the Range. But no, she wasn't just at Chicago Open Air for Five Finger Death Punch. This little lady, with her family, had been in, or close to, the front row of the main stage from early on day one of the festival, wearing her FFDP t-shirt, right through until she was invited on stage late in the evening of day three. Crowdsurfing like a hero (with a parent or friend in tow). Cheering the bands all through the festival. All day. All three days... Those of you who like to turn up just for the late-late show? Ask Chylynne what you miss! (It's a lot.) There are more photos in the People of Chicago Open Air collection, linked from this post, click here!

And today... Five Finger Death Punch have released a new video, for I Apologise, from their latest album, Got Your Six. It speaks for itself. It's moving, it has a message, and I hope that everyone who knows someone suffering from an addiction, or who is struggling themselves, hears the message. There's only one person who can make the change. Just one.

Five Finger Death Punch are on tour all over the place for the rest of the year: USA, Canada, Europe, Mexico for one date tomorrow, July 23rd... and I'm still trying to work out the best intersection between the FFDP tour and the Marillion tour because there really, really must be a way to see both, as they are both on the road in the USA at the same time in October!

Ivan? You know that cuppa tea is still on offer, right?