The Last Internationale at Aftershock 2014: protest song meets the metal

I think this is my best set of photos, so far, from Aftershock 2014. (There are a few sets to go... I shot twenty-nine performances over the two days of the festival, and quite a few crowd shots too... so there may sitll be some gems un-edited yet.) But these may be my favourite photographs of the entire Aftershock 2014 weekend.

Ethereal but strong. Aggressively beautiful. Angry in gentleness. Oh and I like the music, too.

Delila Paz can sing with the power and soul of Grace Slick, the pride and heritage and solitude of Buffy Sainte-Marie, the clarity of Joan Baez, the stories of Bruce Springsteen, the clarity and truth of an Irish folk singer, yet with a sound and heart that's all her own. With Edgey Pires a strong lead guitarist, and powered by Brad Wilk's drums, this band deserves listening to. A lot of listening to. There's a touch of Anarchy in there, but in such well-dressed clothes that you won't know until you're naked and exposed, throat bared to the song.

If you want to feel shivers run up-and-down your spine, take a listen to this song; Cod'ine. Written and recorded by Buffy Sainte-Marie, it's been through a few hands: also recorded by Courtney Love, Donavan, Quicksilver Messenger Service, Janis Joplin, to name just a few.. but very very few have done it as much justice as Ms. Sainte-Marie herself... and now The Last Internationale.


The Last Internationale's album, We Will Reign, is available now.

For all Toon's Tunes photos from The Last Internationale at Aftershock 2014, see the photo gallery.

(And please can someone identify the bass player who played with The Last Internationale at Aftershock? Facebook Toon's Tunes please!) 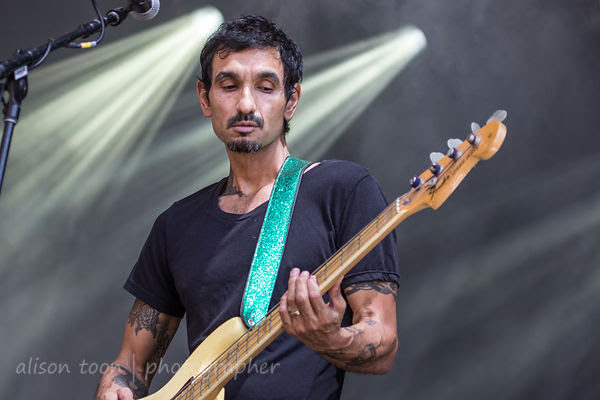