Another Halleluja? No really, it's just one word: Hallejulah!

I probably shouldn't have been at the Lincoln Brewster show on Thursday evening. I knew I was going to be out of my comfort zone. I just didn't know quite how far out. Boy, I was way out. I thought it would be music, not church. My mistake. Mine alone. 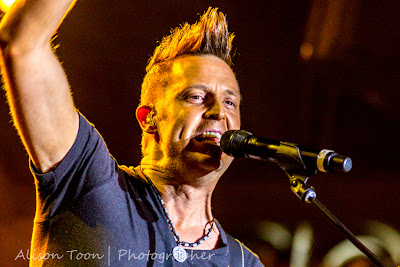 To preface this review: I don't "do" organized religion. Not Christian, not Muslim, not Jewish or Jain or anything else. Not Reconstituted God or Reassembled God or whatever the heck you want to call it. And before you label me anti-god, anti-Christian, anti-religion understand this: I was raised a Christian, both Methodist and Church of England, and I love John Wesley hymns and the true philosophies behind all religion: live in peace and treat your fellow humans with dignity, care, equality and friendship. I have explored eastern faiths, been to India, spent times in spiritual places all over Asia and Europe, and my favourite place in all the world is Jerusalem. I know the meaning of the Holy Land, and I believe it's a more than a name for a fought-over piece of land: it's a physical, spiritual and inner "place" that everyone needs to visit (either in person or in spirit). I've known and admired pastors and vicars and priests who live their lives in a holy and good and loving search for truth. And I've also seen my little children scared and bewildered because a priest told them that, if they didn't attend church every week, they would "offend Jesus". I've lived first-hand the hypocrisies justified by someone's personal hotline to God. So no, I'm neither an atheist nor an agnostic, but I'm really and truly am not "into" organized religion, and I push back--hard--if someone tries to force-feed me. And you need to understand that, to understand my reaction to Brewster's show. While I came to Lincoln Brewster's show with open ears for the music, I really didn't expect the concert to be church.

Lincoln Brewster is a talented musician and guitarist, and he can shred with the best of them. Giving up a (possibly-lucrative) career as a musician to dedicate his life to helping other people, is something that I can applaud. His music is strong, the band is pro, and he puts on a rocking, class act. If you want to read more about Lincoln's career, Google him: there's a lot already written that I'm not going to repeat. And if you are local to Sacramento, and want to see and hear more, Lincoln is a pastor at Bayside Church in Granite Bay, California. 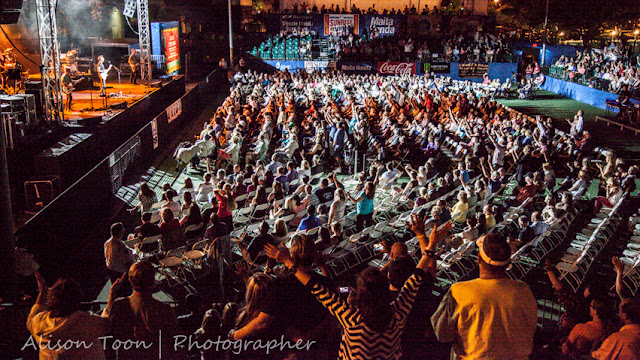 I just found the whole show personally uncomfortable. It seemed like the majority of the audience was the congregation from Lincoln's megachurch, and I was worried that there would be snakes and people talking in tongues and such. (I did, myself, do some talking in a very strange and bad language, but that was because of Hallelujah, and I apologise to those who overheard. But there were no snakes involved.)

There's a fine line between raising one hand for Jesus, and raising one arm in a Nazi salute. When people are en masse, hypnotised by a common faith, beit religion or politics, sometimes it's hard for an outsider to see the difference. And maybe churchgoers would say the same of rock fans who raise their arms and clap and stomp for their favourite artists. It's all open to interpretation. It's just scary when you are on the outside, and know you'll never be on the inside of "this"... and nor do you want to be. 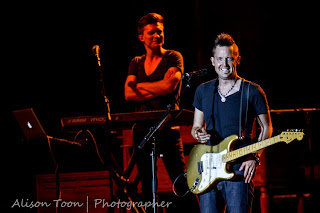 If Brewster's charisma is encouraging his followers to lead more generous, kindly, non-judgmental and tolerant lives, that's wonderful. If his music is encouraging more people to take a path in life that will lead to peace and goodwill to all men, women and children, that's wonderful too. If it means even one person gives up beating his wife and/or children, or spends an hour more time helping those less fortunate than themselves, it's all admirable.

And he sure can play that guitar.

I just don't ever, ever, EVER want to hear anyone do THAT to Leonard Cohen's "Hallelujah", ever again. Not once. Never. No. Not ever. And yes, I do feel that strongly about it. I had to wait nearly two days before writing this. Otherwise there would have been more of the afore-mentioned bad language.

Just because the song has a beautiful tune and "Hallelujah" is the refrain, it doesn't mean the lyrics should be bent into a religious anthem. That was never the intent. For goodness sake... it's just the opposite. It's not "Another Hallelujah". You just don't do that to a beautiful, iconic song.

These are the real lyrics for Hallelujah!  just in case you don't know. Leonard Cohen wrote it. He's Jewish, by the way.

This is how the song should be sung:

Like I said, I should have known that Thursday's show wasn't for me. Tonight, it's Bachman Turner, and Blue Oyster Cult. I'll be back in my comfort zone.

But will Skillet expect the audience to pray, at Aftershock? Now I can't wait to find out...
Posted by Alison Toon Photographer at 1:59 PM