Bring Me The Horizon at #Aftershock... been waiting a long time to see this!

It's evening. Gibson Ranch Park is full of more people that it's ever seen, ever. This is Aftershock, 2015, Elverta, near Sacramento. Thirty thousand people? More? We're waiting for Bring Me The Horizon; those at the front of the crowd, just behind the barrier, are young, but not the same all-girl crowd that were at the front for Black Veil Brides.

These young men from Sheffield, England--once the heart of England's steel industry, so truly a metal town--are singer Oliver Sykes, drummer Matthew Nicholls, bass player Matt Kean, guitarist Lee Malia, and keyboard player Jordan Fish. They've ruled the world in the UK for several years now, and this year, at last, the US has sat up and taken notice. Or rather, jumped up, because when Oli says "JUMP!!", you jump.

Sacramento's Aftershock was jumping on Saturday, and then the band headed straight down to Knotfest to do the same in Southern California on Sunday.

BMTH are now back off to a sold-out tour of the UK and Europe, Australia early next year, then more dates in Europe. Don't you wish you could just pack a bag and go to every show?

New album, That's The Spirit, is out now. Go get yourself a copy. You won't regret it. 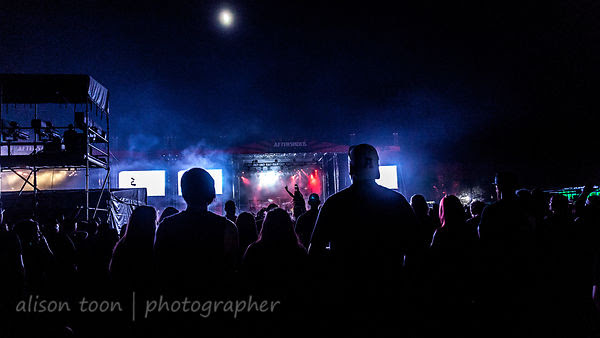 Other BMTH posts on Toon's Tunes:

Photographing Bring Me The Horizon on Saturday was particularly challenging, given the back-lit stage which looked wonderful from out in the crowd. The results are arty, gritty, Sheffield... a little like the band. Just jump.

Many more photos from the show in the Bring Me The Horizon photo gallery.
To be notified of updates from all the Aftershock concerts, follow @alisontoon on Twitter, or like the Toon's Tune/Cameras and Cargos Facebook page.

Posted by Alison Toon Photographer at 7:22 AM