You bought tickets way in advance; you came in campers or Jucy Campers and in Lyfts and squashed into your neighbor's cars and in Ubers and on foot from just down the street, and on an airplane all the way from Peterborough, England. 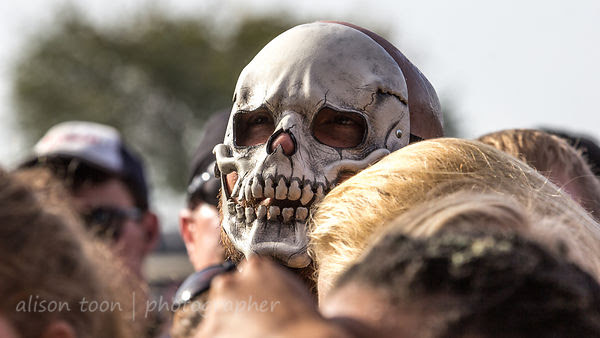 You waited for hours and hours for your favourite bands, in the hot-even-though-it's-the-end-of-October sun, and boy was it hot. You supported the bands, the performers, who were here just for you, and you made them know how much you appreciate them.

You wore masks (because Slipknot) and bandannas (because dust), though there was far less dust that at Discovery Park last year, and there was more room for more people and it was bigger and better than ever, though you did miss Five Finger Death Punch a little bit.

You threw your underwear at the stage with love-letters for your heros, and you were that one brave dad standing in the middle of the crowd of screaming teen girls, and dad, I salute you, 'cos you were braver than the tough dudes in the middle of mosh pit.

You played nice in the crowd even when the person next to you screamed in your ear, and you didn't crowdsurf as much as in previous years, at least not until Slipknot and Deftones, but then you went ballistic and wild and went over the barrier in droves. You listened to your favourite bands and your kid sister's favourite bands, and your mom and pop's favourite bands too, because there was something for everyone and everything for someone this year. What a lineup that was!

You prepared and sold fries and bacon and burritos and cups-of-corn and so much else, so that we didn't starve, and you sold beer and liquor so we could, and did, fall over at a quarter-past-midday on day one (at least one of us did that).

You kept us safe and you danced with the crowd; you high-fived the front row and gave them water. You provided security with a smile this year, and you caught all the hundreds of crowdsurfers that rode over the people towards Deftones. 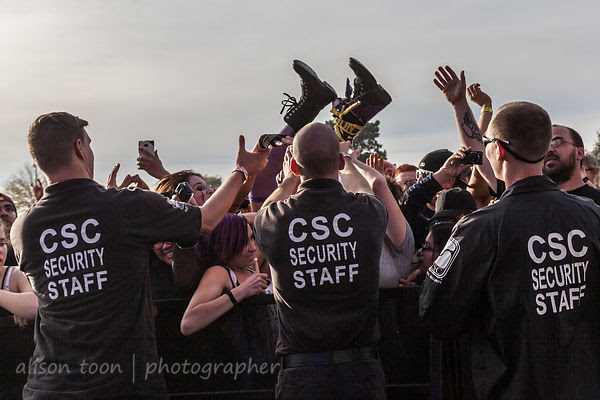 You picked up all the plastic bottles and cups that we somehow managed not to put into the garbage bags, and the park looked like new.

You manned the FXCK Cancer stand and the merch stands and Crazy Dave's and wrestling and everything else, and you smiled at the thirty thousand or so faces who came to look and to listen and to rock and to party,  and you stood on your feet all day from early to so late it was early again.
You painted the graffiti wall, again and again and again, and wasn't it fun!

You wore your Sunday best, even on Saturday, and you danced like no-one was watching, even though you knew very well that we were.

You were sensible and adventurous or simply didn't like driving, and you camped, in tents or in RV's or under a tarp on the back of your truck; or you sat in traffic and arrived home late on Saturday, but came back early on Sunday for the second day of awesome. You woke up on Sunday in the campsite to Mike Patton singing you to breakfast, and that was just wonderful! And you played beer pong on Friday night, all night, or you wore earplugs and slept like a baby (you know they don't sleep, right?) and it was so much fun you'll do it again, next year, because it makes for a huge weekend, but next year you'll bring plastic tent stakes instead of the ones that ended up in the bin..
You administered first-aid to those of us who needed it, whether from fainting in the sun or at the sight of your idol, too much beer, or a sore foot. You organized and marketed and publicised and worked the whole darn festival, and you did an amazing job, so much so we didn't want it to end.

And you, the musicians, you came to Elverta, California, and you got onto the stage and you played your hearts out in the midday sun and in the cool of the evening, and you signed so many photos and things and body parts that your mind must have gone numb, but still you smiled; we thank you for the music!!!

People of Aftershock: once again, you rocked this weekend!!!! Without you, Aftershock would not happen... and I salute you, one and all! Thank you!!! (That was my biggest birthday party ever!!!)

Many, many more People of Aftershock 2015 photos in the photo gallery. (And if you step back up a level, bottom-left of the gallery page, you'll see the People of Aftershock galleries from previous years... were you there, too?) If you find yourself in one of the hundreds of photos, you can share on Facebook and Twitter--just look for the button at the bottom of the page, and use it!