Slipknot, and welcome to my nightmare... at #Aftershock

Earlier in the day, we'd watched Corey Taylor signing stuff for an anaconda-long line of fans: a face, a book, arms, a pillow, t-shirts, a couple of necks, two or three face masks, an artificial leg, and probably a million printed photos, which ran out before the end of the very-long snake did, and then he was signing tickets and laminates and whatever the fan had handy. And being so friendly, kind, and genuine to each and every person who arrived before him at the table in Crazy Dave's Music Experience tent at Aftershock in Elverta, California. There were a lot of happy faces!

A few hours later, and this happens: 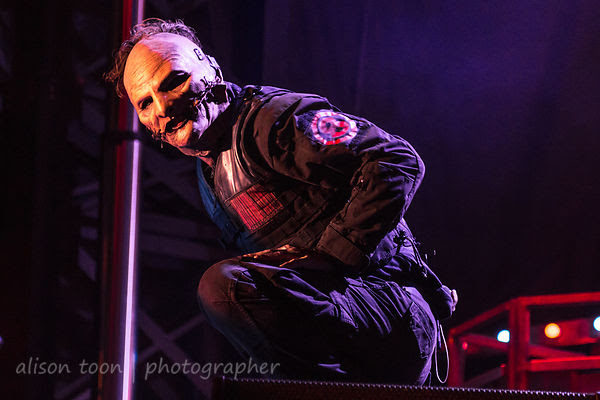 Slipknot, live, are made of nightmares. From Corey's torn-and-repaired face to the manic clown and Mr Long Nose spinning round and round at their high-rise drumkits, to the nippy masked-and-beaked guy who runs around and jumps up when least expected, to the guy-at-the-back with long spikes all over his head, to everything about the visual Slipknot show: welcome to your nightmare, far more than anything Alice ever did.

And, of course, the music. That's scary too. But we love it.

What a way to finish the first day of this year's Aftershock!!!

(Next year: Stone Sour too please?)

Many more photos from the show in the Slipknot photo gallery.To be notified of updates from all the Aftershock concerts, follow @alisontoon on Twitter, or like the Toon's Tune/Cameras and Cargos Facebook page.
Posted by Alison Toon Photographer at 7:11 AM