The WBTBWB show left me feeling a little overdosed on screamo-hard-metal-death-post-whatever-whatever-WHATEVER-the-heck-too-much-screaming-too-little-singing-applecore, and so for the past two weeks I've been listening to more melodic and tuneful vocals: Zucchero's "La Sesión Cubana", the Gipsy King's "Savor Flamenco", I'Octane's beautiful new reggae album "My Journey", and to the wonderful EP, "Fourplay", from The Three Way (don't forget their CD launch party, April 12th).

And also to a preview copy of Willam Control's new album, The Neuromancer, which will be released on April 4th. (William Control, electronic project of wiL Francis, vocalist with the band Aiden.)

The first time I listened to it, I very much was taken by William Control'spoken voice... it's a stage actor's voice, a poet's voice... but then my brain dragged itself down a pedantic, mental, pronunciation-of-English rathole, thinking about all the ways in which "mirror" can be pronounced. (I grew up saying "mirr-oh!", most of England says, "mirr-uh", but never had I heard a reflecting-glass be called "meeeeeeeeeeeeeeeeeeeeeeeer" until I arrived in the USA years ago and yes, I still find it distracting, stupidly, as the first listening to The Neuromancer proved. Weird how one word can do that.)

The second time I listened to The Neuromancer, I heard a touch of Depeche Mode and Spandau Ballet, but with a raw edge. There are subtle reminders in the lyrics, too; you'll hear mention of a "personal Jesus" in God is Dead, and "new romantic boys" in Revelator. 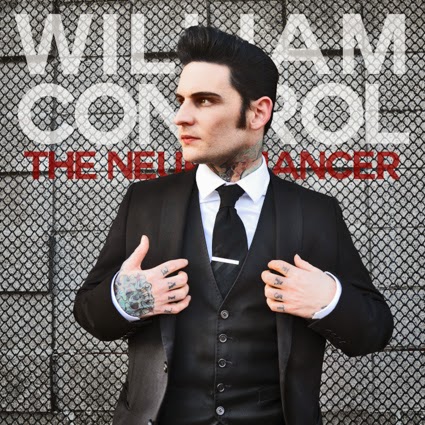 The third time I listened to The Neuromancer, I started to grin, as the lyrics really kicked in. While the music is immediate and light and catchy and danceable, the lyrics are a snippet grim. A little black. A tad sacreligious, a touch resentful, but very clever and direct. With topics including S&M (Filth and The Fetish), love, hate, heaven and hell, the juxtaposition of the very-poetic, Plath-like words over the electro-dance beat told me there is a real sense of humour behind William Control. In a way, the album reminds me of Malcolm McLaren's Paris: not that there is any similarity in the music, but rather in the flow, the connection from the beginning to the end of the recording, and in the very clean production.

And then, the next time I listened to The Neuromancer, I truly heard it. It's a work of art.

Above all, the final track, Where the Angels Burn. It's part song, part poem, part longing, part despair. It's the eternal champion searching for his Ermizhad, in song, in word. It's compelling and beautiful and haunting.

(And yes, I've had the album on repeat and will continue to do so.)

The Neuromancer will be on sale on April 4th in the USA. You can also find out more about William Control on the website, http://williamcontrol.com/

"William. You will reveal a capacity to shock, to startle lifeless ones from their profound slumber..."  I think that about sums it up.