I didn't have a photo pass for this show. I obeyed the house rules, left my nice SLRs at home, just brought iPhone and little PowerShot, no removeable lenses. As much as I wanted to see the show, I was also wondering what quality you can really get with phones and point-and-clicks in night-club lighting... bit of an experiment. And I only took one-or-two, because I could see from the LCD that I'd just be annoying myself. I was there to enjoy the show.

I like the setup in the Ace of Spades. It's a big, square room; the stage is diagonally across the corner, with the entrance to the venue diagonally opposite. There is some raised seating, but mostly is a large, open space with an industrial feel... and chandliers above the bar. A whole row of them. And an intricate wrought-iron spiral staircase next to the stage. Good job I didn't have a photo pass, I'd have been up that staircase in a flash.

Or maybe not... walking across the parking lot to get to the show, I tripped and fell, full-sprawl, push-up position but still managed to jam knee. Yes, of course, the bad knee... ouch. Really, ouch.

Show started with a set by Beverly MacLellan. One word: OUTSTANDING! (Next guy who tells me that women can't sing rock...)   Incredible voice. I feel very lucky to have heard her. Steve Vai does a wonderful job of recognising talented musicians: see his http://www.digital-nations.com/ site for examples (and check out my friend Richard while you're there /) You know that he will only tour and play with excellent musicians; he's found a gem in Beverly. I came home with her latest CD in my bag.

Just before Steve came on stage, I was standing a few people back from the stage, when this happened: 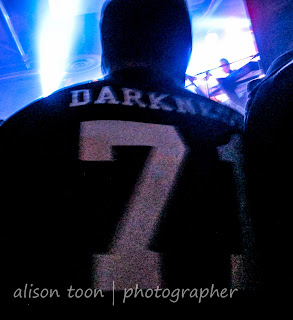 He's about 6 foot 7, about 250 pounds, and ... obnoxious. He forced his way through the crowd, pushing other fans out of the way, to get right to the front. That tall, he could have stood at the back and been able to see over everyones' heads. I guess he was a big (sic) fan, but...  Oh and then a couple of songs into the show, he did the same thing all over again on his way back out again. (If you have one of these T-shirts and it's not you, I apologise in advance for possible British swearwords.)

But then Steve Vai and his team of musicians launched the show with a couple of tracks from the new album The Story of Light.

Mr. Vai, as always, consumate musician, true showman, magnificent magician with the electric guitar. I'm a "seventh song" fan myself--the seventh track on each of his albums is usually a slow one--but I love to see him live. His pure joy in the sounds he can bring out of the strings makes the show magic. He's in love with his guitar... no, guitars. There are several. And they all have names.
I had to leave before the end of the show--had to work at 6 am the next day, and I really do turn into a pumpkin... I knew he'd play "For the love of God" after I left, and of course, he did and I missed it. Sorry, Steve, I'm sure it was amazing. As usual. 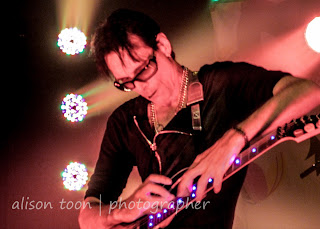 I'm not sure about the harpist. Maybe on the album you can hear her contribution, but from the stage, in the live venue, the only time I could distinguish the sound of the harp was during the solo. It looked impressive, the solo was pretty and musically-excellent, but apart from that, I just couldn't hear it.

Here are the photos. Hopefully next time Mr. Vai is in town, I'll be armed with a photo pass, a couple of SLRs and some nice glass. Instead of an iPhone with a broken screen, a baby Canon, and some Lightroom jiggery-pokery.
Posted by Alison Toon Photographer at 7:10 PM