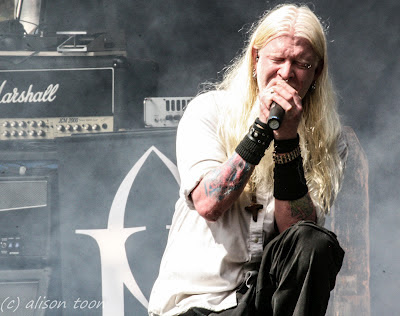 I don't write reviews about music that doesn't move me, not any more. Did that for quite a while, years ago, back in France, at the beginning of internet time. Wrote about music I loved, music I liked, and music I just didn't understand how to start liking. It's hard to write creatively and meaningfully about music or writing that you yourself don't enjoy, when you know other people do. Why criticise something just because I like green and you prefer pink? I prefer to take pictures... so when you see a longer review on here, it means something has touched, moved, nudged something deep.

Before going to Aftershock, to photograph all the bands, I did my research. Checked out those that I didn't know, or didn't know well. I'd never heard of Gemini Syndrome before that. And there is not too much available, yet, as recordings or official videos or sneaked-in-the-cam-to-a-show YouTube movies. But there's a little... and I knew they were the one band I really wanted to see (as well as STP of course, and under Karli's guidance, Bush).

Gemini Syndrome already have some rave reviews coming out of Los Angeles: "Most Anticipated New Artist", the cover story of Hollywood Music Magazine, among others. A few more have been added since their appearance at Aftershock; and I'm certain there will be many more.

I really don't go for metal-screaming. Ask Jade. She tried to teach me by oh-so-lovingly sharing her whole Cannibal Corpse and randomly-nasty Scandinavian metal band collection, full volume, when we still lived in France. Really I don't like it. I think it's the failed singer in me. It's not so much the music: it's the vicarious pain in the scream-rasped sore throat that makes my ears hurt.

So when I heard the first few bars of "Resurrection" online (there's a version on YouTube, I don't know if it's official or not, so I'm not linking it here, but I'm sure you know how to find it), I didn't for one moment think that, by the end of the song, by the end of the set at Aftershock, I'd be completely-and-utterly hooked. Line and sinker. A Synner. And the rest... "Basement", "Take This"...

Aaron Nordstrom can sing. He can scream, but he sure can sing too. They all can. The band makes music. Good music. And they are rather special to see. These are not babies; a relatively-new band, maybe, but it's a gathering of musicians.

So... I'm waiting for the first album, and waiting for tour dates to be announced. Hopefully, once again in Sacramento. (Aftershock, and the Sunrise at Night concert series, both proved the huge audience there is in this town, and in all of Northern California, for rock. For music. Not just in the bar scene, but accessible-to-all venues.We need to put this town on the map, good-and-proper.)

Other reviews on this blog:  Aftershock, first thoughts

Gemini Syndrome photoset on Flickr (This set has had more visits than any of the other Aftershock performers, more than my set for Deftones, more than Bush, more than STP. Way to go.)
Posted by Alison Toon Photographer at 7:41 PM