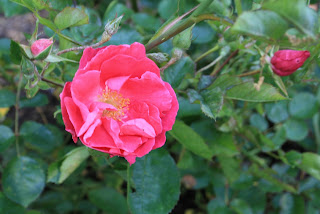 Last year, there was an apparently-dead stump of wood on the hill that runs down from the pool area. Very close to one of the privet trees that were removed. Nothing doing: just another old stump,

Then late last year, a rose-shaped twig appeared. Just one. Thin and weedy. After a while, I cut it back. A couple more appeared during the winter... then suddenly, with the new year, a whole rose bush sprouted, and now it's rambling over the slope, covered with buds.

So where did it come from? A random seed, dropped by a rosehip-feasting bird? A long-dead rosebush resprouting now that there is no privet sucking the life from the soil? The root stock of a grafted rose, just doing its own thing?

Whichever... it's pretty!
Posted by Alison Toon Photographer at 6:23 PM