Stone Sour, fronted by Corey Taylor, took to the Monster stage at Aftershock in Sacramento, California, in brilliant sunlight, on Saturday afternoon. Currently touring their latest album, Hydrograd, the forty-five minute set included the recent hits Taipei Person/Allah Tea, Fabuless and Song #3, plus Made of Scars, Say You'll Haunt Me, 30/30-150, and Through Glass from earlier albums. 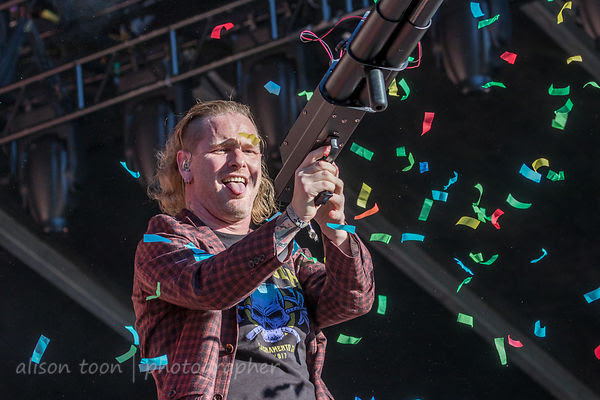 The band has very different persona to Corey Taylor's other project, Slipknot (who performed at Aftershock in 2015): more melodic, alternative hard-rock than Slipknot's masked, extreme, scary-clown-and-horror-story, hard-and-heavy metal. Corey Taylor reveals a gentler side, but just as intense a performer: the music, wonderful.

The festival-length set's time length; a tantalising taster that left the listener longing for more.

Stone Sour are appearing at Knotfest Mexico, 28th October, Ozzfest Meets Knotfest in San Bernadino, California, on November 5th, and then they head to Europe for a tour that lasts several weeks and hits many cities!

The photogallery for Aftershock's appearance by Stone Sour: click here