Love is a Battlefield has always been my favourite Pat Benatar song; it was the highlight of last night's show, for me, at the California State Fair, and it was singing in my head when I woke up this morning. Memorable and meaningful.

The show began with a very cool video and photo collage, telling the story of Benatar and Giraldo's growing-up and growing-together in music. The stage backdrop looked like the inside of a warehouse or barn; broken windows, corrugated metal, and a subtle light and video show.

The concert area was packed, both the seated area and outside, as Sacramento fans congregated to watch one of rock's best-known couples--and female rock singers.  (I just wished they had all arrived and seated themselves on time, early, before the show began.) 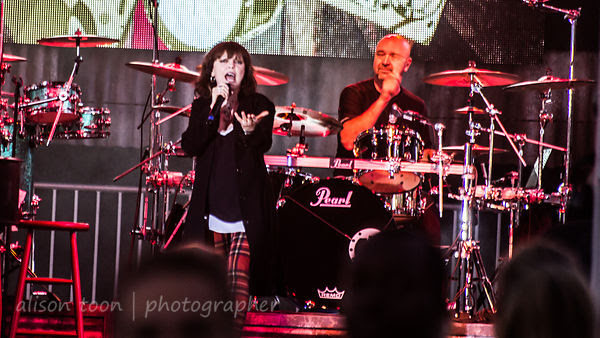 In the past few years, I've been lucky enough to see Debbie Harry, Joan Jett, Pat Benatar. Only missing Chrissie Hynde from the group of women rockers who somehow go together in my head/musical memories. And, of course, I'd just love to see Annie Lennox again.  Maybe next year?

Posted by Alison Toon Photographer at 8:21 AM