The past three times that I have seen Jonathan Davis perform, it's been as the frontman for Korn; before audiences of tens or twenties of thousands of people in California and in Chicago, out in the open air, and from the perspective of a photographer in the pit between the stage and the barrier, the performers and the enormous crowd of  fans. Crowdsurfers, muscular security teams, stunning light shows, intense heat, and that beautiful, entrancing Giger mic stand. 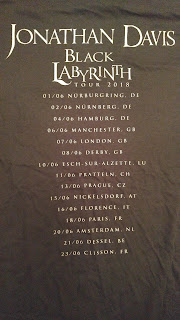 Last night, it couldn't have been more different.

O2 Acadamy Islington is inside a shopping center, in one of London's ancient corners: Angel, Islington. Just across the road from a tube (underground) station; close to random budget hotels, and with a street full of cosy, boutique restaurants, mobile phone shops, traditional English pubs, the usual high-street brandnames, and places that sell breakfast, but don't open until 11 a.m. The venue is like an empty, concrete cube, with a small stage, a couple of bars, and an upstairs gallery that runs around two sides of the stage. It reminded me of the drama studio at my high school, and probably held about the same number of people: capacity for the O2, Islington, is 800, and from my spot on the barrier at stage left, it looked like we sold it out. (If you know Sacramento's Ace of Spades, O2 Islington is about half the size.) I didn't go and count, because heck, I was not moving from that spot on the barrier. Sometimes you just have to let the inner fan girl or boy run wild.

On tour with band of creative and talented musicians, and including double bass and violin, Jonathan Davis brings his first solo studio album to life on the stage. Playing almost all of Black Labrynth (here's the earlier review), with a few earlier songs in the mix: Slept So Long, and Love On The Rocks, a wonderful, gritty Neil Diamond cover... with a twist.

Wonderful show. Amazing privilege, to see such a huge performance in such an intimate setting. Like inviting them to play in your own front room with all the neighbours invited. You could tell: the band enjoyed it as much as the crowd.

Two weeks after the album was released, and it seemed like everyone there already knew all the words. That's a pretty darn good endorsement. I think we know why.

Jonathan Davis played this evening at Download Festival, Donington Park, Derbyshire--back to festival-huge crowds--and will follow that with dates and festivals in Europe: see here for more info. And then later in the year, Columbus OH, and then Aftershock Festival in Sacramento, California. Catch him if you can!

I still love this shot. Any excuse to share it again.