Enter Shikari, new video, and chatting about touring the USA

Enter Shikari have a new video for their single, Redshift, and you can see it here: it was recorded at London's Alexandra Palace, at their biggest show to date, and certainly conveys the energy of their live show. (Alexandra Palace opened in 1873 as a place of entertainment for Victorian London, and in 1936 became home to the birth of broadcast television in the UK.),

While on the road recently over here for their latest USA tour, Rob, drummer with Enter Shikari, was kind enough to answer a few questions.

We're seeing more very interesting British bands starting (at last) to make inroads into the USA market again. For example, Bring Me The Horizon started to make it big here last year, and I'm thinking Catfish and the Bottlemen will really break through here soon. What are Enter Shikari's latest plans for the USA market--this is a huge tour of the USA and Canada, including several major festivals. Is this side of the pond a focus area, will you be spending more and more time here?

British music has often done very well in the US, I think maybe the audiences find our accents exotic but still speaking a language they understand! We realised that this is our 22nd trip over to America over the last 10 years. It is a very difficult thing to do without losing a lot of money, just the flights alone can be crippling to a touring band but we keep at it because there a lot of people who want us here. There is of course a lot of online marketing that helps get our music spread across the world. Any activity we do anywhere over the world sends ripples through all other countries so really anything we do will have an effect on the US, not just direct tours / festivals.

I know of several British bands who have had visa challenges at the beginning of their USA tours in the past few months (and I very much hope yours are all OK!)  Are the visa struggles and taxes, plus all the regular touring expense, a big deterrent for British bands touring over here?  What extra steps do you have to take when preparing for a USA tour versus Europe?

I think they are. I myself could not get a visa for two years, we had to hire other drummers to fill in for me for a few tours which was gutting. I know of a lot of bands that have either decided not to carry on with US touring or just not go in the first place. The vast majority of our tours over here have lost us thousands of dollars. We do a lot to cut down our expenses like taking a smaller crew out with us, having a much smaller lighting package, hiring a smaller bus and shipping a minimal amount of equipment from the UK.

Great that you're playing Rockville and Rock on the Range! Any plans to be back later in the year for other shows on the festival circuit? (We have a big one here in Sacramento--Aftershock festival.)

Yeah we are looking forward to those shows, it has been a while since we have done a US festival that wasn’t Warped. We don’t have any solid plans for coming back as of yet but there will always be more stuff in the pipeline. Obviously with the said expenses of touring here we really have to tie festivals in with other shows, we can’t unfortunately just fly in for the one show like we can around Europe. Not to mention the awful affect it would have on the planet, we try to keep that to a minimum. That being said, feel free to let us know about more festivals we can do, maybe we can find enough to string a tour of festivals together! 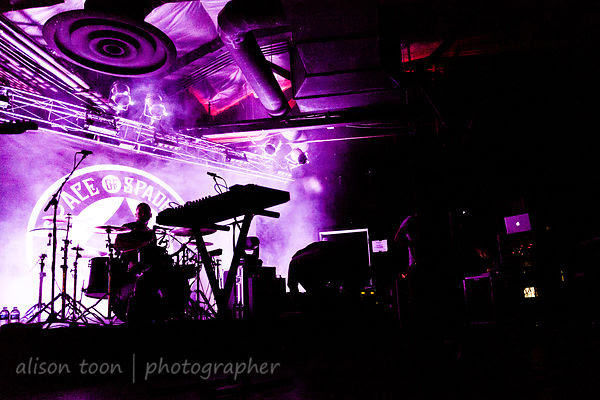 What parts of England and British culture do you miss while you're touring abroad?  (If you say HP sauce, I know where to find it)

We were literally just talking about how we can’t buy a kettle out here. How do you boil your water for tea? On the bus you often find a lot of half drunk bottles of water that no one wants to drink because we don’t know who’s mouth has been around it. So having a kettle really helps but we can’t seem to find one that you can just plug in, they all seem to need a stove.

Thank you so much for sparing the time for this chat! I'll take you to the best electric kettle shop next time you're in Sacramento--I had to hunt high-and-low for one when I first moved to the USA, but Target sometimes has them now.


Enter Shikari will be spending the rest of the summer appearing at European music festivals--the tour dates look like a dream road trip through eastern and central Europe--and then will be touring Japan and Australia at the end of the year: keep an eye on their tour page for a return to the USA sometime soon!
Posted by Alison Toon Photographer at 7:26 PM