Whoever thought of putting these four bands on the same bill--Atreyu, Falling In Reverse, From Ashes To New, and Assuming We Survive--deserves a commendation. With Atreyu and Falling In Reverse sharing top billing, both the supporting bands were on fire on Friday at the sold-out show at the Ace of Spades. (Not only was it sold out, but the doors were open at 6 pm, and by 6.30 it was already full to the brim, hardly space to wriggle between fans to the bar, the bathroom, or to check out the merch stands.) The place was buzzing, all night.

Tonight--20th December 2015--is the final show of this tour, so if you don't want to miss it, you'd better head to Fresno. Quick. And be prepared to have to hunt down tickets.

Both Atreyu and Falling In Reverse brought along impressive light and fog, with Atreyu at times disappearing in the clouds. Best viewed from the rear of the room, across the raised hands of the crowd, it made for a beautiful sound-and-visual.

If it was the first time you'd seen Atreyu live, you might be forgiven for thinking that lead vocalist, Alex Varkatzas, was lip-synching, but no, not at all: drummer Brandon Saller sings all the "clean" vocals, shrouded in the stage-fog on Friday, but heard loud and clear. (There's just one, grainy photo of Saller in the photo gallery.) 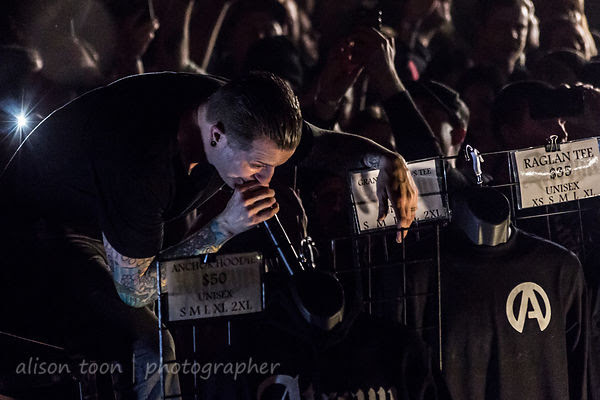 Varkatzas made several (many!) escapes from the stage into the crowd, at one time singing to the merch stand team, another time up on the balcony, many other times from within the mosh pit and cheering crowd. Great reception from the Sacramento fans for Atreyu: remember that it was at Aftershock 2014 that the band reformed after a hiatus.


Falling In Reverse took the final slot of the night, drawing lots of young women to the front row of the audiences. Ronnie Radke, the unbreakable bad boy that all the good girls fall in love with; his at-times-self-deprecating lyrics, a rock-metal that is heavy enough to appeal to most metal fans, yet accessible for the pop market too... what is there not to like?  Great show, really fun, and I totally understand why this show sold all tickets.

I last saw Falling In Reverse at Aftershock in 2013. I love the way they have developed in sound and presence over that time. Really, really worth seeing and hearing.

From Ashes To New: once again, a stellar performance. First time in Sacramento? It won't be the last. I really like this band. Check them out, if you have not already... well worth a listen.

Both From Ashes To New, and equally-professional, music, heavy, metal and entertaining Assuming We Survive will have left town late Friday knowing that they have a whole crew of new fans in Sacramento, California.

Come back soon, all of you!

Photo galleries (or just click on one of the photos above):

Posted by Alison Toon Photographer at 10:56 AM