Why? Because... frustration at the despicable and unprofessional (there's no better word for it--despicable) way that TMZ and then other gossip sites, decided to share a "news story" (cynical quotemarks intended), and the way in which the world just copied and pasted, liberally sprinkled with "alleges" or "accused" or similar I-didn't-say-it-so-you-can't-sue-me terminology, no facts and no dates, no backstory, no research, no documentation, no nothing-at-all but the sort of nasty gossip that thirty years ago, would have reached the end of the street afters a week, and which today is around the world six times before you can refresh your screen. Truth or lies? What does it matter any more... nobody cares about truth, it's all about the number of times readers click through to an ad.

I'm not going to regurgitate the details here... you want to read it all, you just have to Google Ivan Moody's name. I have no clue whether he is, or is not, married. Nor do I know anything about his relationships or his family, violent or peaceful or anything else. I just know the man's music, his lyrics, his song, and the person I met and talked with and liked, very much, for all of a few minutes, last year at Aftershock 2014 here in Sacramento.

Don't think for one moment that I turn a blind eye to domestic violence, or to abuse, abuse of any kind (you don't have to hit someone to abuse them). I have no reason to do that. No reason at all. Just understand that this whole internet-news-gossip-fake-journalism-debacle stirred up something, and now I need to write it. Because... family violence, domestic violence, is not something to be hidden, or excused, or worst of all, ignored. By the same measure, it's not something to be invented or lied about or misrepresented or exaggerated. It is a very real and life-threatening problem. And it needs to stop.

Domestic violence is my responsibility, and it is yours, and it's the guy next door's and the woman's across the street. Each and every one of us. It will not stop: not without concious action, and not until every child born is raised in a safe and loving home. Each and every child. Every last one. To me, that is the key to so much.

(If it's two consenting, unfearful, equal adults having an escalated, both-sides-participating, drunken argument, then maybe that's not so much domestic violence as just plain stupidity... and maybe it's time for a rethink before considering doing the same thing again. )

There once was a young woman. She met a young man, a little older than she was, but not by so much, just enough to know a bit more about the world and its ways. He'd been to work, he'd been to the city, and he'd been in trouble, and he'd survived. He was funny, smart, bitingly intelligent. He read as many books as she did. They traded authors. They traded music. There was love, but more than that, there was a deep and rapid friendship.

They decided to marry, just like that. She was eighteen, he was twenty-five. On the wedding day, several of their family and friends didn't turn up: not because of the short two-day notice, all it needed to obtain the marriage license, but because they saw something the happy couple didn't.

Was it doomed from the start?

Hardly... she had grown up in a home where she knew she was loved. Her parents argued sometimes, for sure, but she had never known anger, nor the soul-crushing fear of someone you love holding a knife to your throat, nor pulling you around the house by your hair, nor punching you in places where the bruises won't show. She had never known any of that.

But it was doomed, alright. It was doomed from the moment he first hit her. That punch, that slap, that threat on the stairs: it rocked both of their planets out of orbit. It changed everything, everything.

And she left him. She took her bag and the dog, and walked out the door... and an hour or so later, in a roundabout way, came back to find him crying.

Yes, the relationship was doomed, from that first angry, violent, split second. But they didn't know it... they worked at their hopes, again and again and again. They raised two beautiful, happy little girls. He loved them, he cherished them. He loved his wife, but he could only tell her in a whisper  in the hollow of the night, when he thought she was sleeping, after he had been awake non-stop for three-amphetamine-fueled-days and before the paranoia stepped in. That was the dangerous time, that and the days on downers, the Valium that the doc gave out like candy, the codeine cough mix that he toured the county to find. Those were the days she hid her thoughts like shadows and anticipated his wishes like a genie with an angry master.

Like I said: she had been raised in a home with love. With trust. With the fundamental knowledge that family is not like this. Family is not bruises, fear, or anger so volatile and so real that your heart could burst just waiting for the inevitable next time.

The day he hit, and kicked, her, in front of their children: that was the end. That was the last time. It was as if the truth of family broke through her marriage contract, her promise of love-forever, and her bloody stupid, irresponsible and inviolate pride. But this is the point of this story: it was her own childhood, and her own children, who saved that young woman. Sadly, it did not save the man.

It was by no means easy. Sometimes you have to live two lives, to live the one that matters. There's more to the story, but it's not for here.

Regrets? For sure... it's a story full of regrets. Most of all, that he is not here now, to see the wonderful young women his daughters have become, nor to be the funny and irrepressible grandfather he could have been, sitting children on his knee to read them stories and to sing them folk songs in his deep and clear voice. And that he could not be here now, as a friend: not only to the young woman-grown-older, but to all the many others who knew him as their best pal: their partner-in-crime, or a local character, or the person who gave them a lift in his truck while driving from one end of the country to another. And a very deep regret that he, himself, did not have the same underlying belief that you do not hurt, terrify, or threaten to kill the ones that you love.


"If we could start again, would that've changed the end?"

Sounds like a Five Finger Death Punch song, doesn't it.

We all play a part. Every one of us: we have to try our best, every day, to raise our children in love, in trust, in truth and without drama or fear. Teach them to be kind. Teach them to be gentle. Teach them to be strong, and honest, and good. Let them paint, and sing, and dance, and make music: let them express themselves without fear. Let them know the boundaries of good, human behaviour, Let them learn a craft, or a sport or a martial art, because then they will learn self-discipline, and they will learn that agression has a place--which is certainly not in the home. 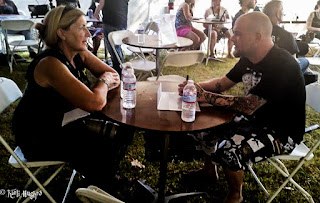 Mr. Ivan Moody: I hope one day we get to sit down together at the same table again, have a chat, have a cuppa tea, a bite to eat, put the world to rights. I'm sure you've got your own stories to tell...

Toon's Tunes is looking forwards to the new Five Finger Death Punch album, "Got Your Six", out soon and available for pre-order now. And to the upcoming tour, including the show in Reno: we're ready!!!


P.S. If you see someone with bruises, or if they are acting in a way that makes you suspect abuse: ask them about it. If you can't do that, just say hello, how are you. Remind them that they are a person of value. Let them know that you know they exist. Sometimes, that is all they have forgotten. As long as they knew it, in the first place.
Posted by Alison Toon Photographer at 7:46 PM