Cutting through the smoke at Wheatland's Sleeptrain Amphitheater, 27th August 2014 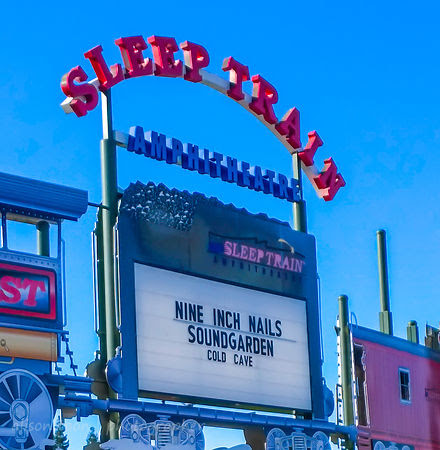 Much-awaited show last night out at Wheatland's Sleeptrain Amphitheater: I say "out", as it's around 45 minutes drive out from Sacramento, and the venue appears to be in the middle of nowhere (though it's really very close to Yuba City). Late summer in a drought year means that much of the surrounding landscape is yellow, barren, dusty, dry. There's always a day when you'll be stuck in a long traffic queue trying to get into the Amphitheater parking lot, in 100 degree temperatures or higher (it always seems hotter there than anywhere else), so we took the back roads, arrived early, parked early, and didn't see any traffic at all.

I didn't have pit photo credentials for this one so was able to relax and enjoy the whole show. Though I find it hard to disengage the photographer's mind... such good and animated musicians, such an impressive light show, such an expressive audience, I wanted to capture it properly for a review... but it was-what-it-was, cameras were locked away, and the show was phenomenal. See the review for NIN, Soundgarden and Cold Cave for the show itself: the comments below have nothing whatsoever to do with the bands who were performing. It's all about the venue...

Relax and enjoy... you didn't have much of a choice. The amphitheater was a cloud of marijuana-fug-smog; it was impossible to sit or stand anywhere without being enveloped by someone-else's dope cloud. Involuntary high.

I really don't care what anyone smokes in their own homes, as long as they don't impose it on their kids, I don't try to judge whether-or-not it's a good thing to do, I might even turn to it as a palliative one day when my arthritis is so bad that meds are needed (but that's not today). But I do care when you decide to impose your choice on my air. It's ignorant, it's selfish, and it pysically made me want to puke. (And to those of you who recognised this, thank you.)

Looking at reviews of the venue on Yelp and other forums, you'll see more of the same feedback. Is there some weird micro-climate in Wheatland that directs all exhaled smoke into the amphitheater bowl? Has there been such a tolerance extended to weed-smoking here over the years, that (part of) the audience comes here because of that tolerance? Do the "No Smoking" signs mean "No Nicotine Smoking" alone?

And there was more than weed being smoked. It was, seriously, ridiculous.

Yes, this did take away from my enjoyment of the show. If you're not a smoker, it feels like poison in such quantities. A little second-hand high never hurt anyone... a whole evening of forced inhalation was awful. People can fail employment drug tests just through second-hand smoke. IMHO, it's not right.

I enjoyed the concert... but this long-standing issue at this venue, and the lack of any visible effort to change it over time (is anyone even reading the venue feedback?) makes Mountain View with its parking issues, or Concorde Pavilion if the schedule improved, a better option for seeing a major show outdoors.

(We drove the back way home, too, and there was zero traffic. There's more than one way.)

OK, rant over. On to the reviews.