UK Marillion weekend: Friday night and it's a record!

Friday night, and the clock's already ticking. Wolverhampton Civic Hall; black country, Midlands, home of Slade, but I'd never been there before, never had a reason to. Until April 12th 2013: Marillion's UK Weekend, first day of three. What better reason to travel the world? Hop on a plane from Sacramento, California, through Dallas, Texas and then to London, England; visit my mum in Leicester, and then drag my best-friend-since-we-were-kids to Wolves for the weekend?

Friday night, and it's Radiation. Beginning to end. All the songs. And yes, the clock was already ticking, and timing, because not only was this a Marillion concert, it was a world record attempt: fastest time-to-market for a recording of a live show. (Marillion had held the record years back, but someone else broke it. Friday night's record attempt included filming and recording, editing, mastering, replicating and preparing for sale a significant number of DVDs and CDs in a very short amount of time.) 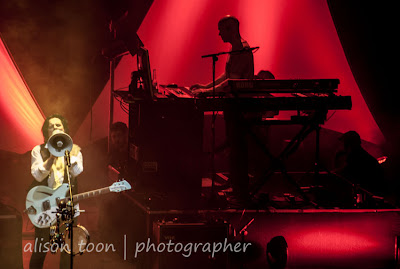 Radiation, Answering Machine... and the Civic Hall crowded with fans, old and new. Some from Poland, some from Argentina: Germany, Holland, Sweden, and at least a couple of us from across the pond. I wasn't the only one to travel a long way, not by far. Some had been to all three of the biannual "weekends" (Port Zeeland, the Netherlands; Montreal, Canada, and now Wolverhampton, England), and still wore the wristbands. We're a committed bunch.

"Three Minute Boy", and the crowd cheers in all the right places. We sing along.

'H' (Steve Hogarth)  is just getting warmed up. "... another miserable song," he says, "This one makes Radiohead look like..." and he dances, hands up, sweetly, like a five-year-old having fun at a party, and then we're into "These Chains", and it's it's -a-rock-and-a-hard-place, and yes, there are more cheerful Radiohead songs out there. But there are people in the crowd who know the songs, and the stories behind them, so very very well, that the band just have to laugh.

"Born to Run". Not Springsteen but Marillion. A beautiful, haunting and painful song. Steve Rothery's haunting guitar; he always seems so serene, standing in his spotlight; liquid music, liquid sound, liquid soulfulness. "... In order to forget what never happened." Some of my favourite lines are from this song: "Slate grey, battleship grey, hardship grey"... "Hopelessly in love with the inevitable loss", "In the end... how can we run from ourselves?"

"Cathedral Walls", soaring. And then, in my opinion, the best of Radiation: "A Few Words for the Dead". People, families raised to fight, raised to hate, to continue the strife, generation after generation, based on some wrong done in the past. It builds and it builds and it builds... "Or you can love!!!!!!" Suddenly it's flowers and happiness and major-key happy and hope is reborn. I love that song. Love it. Have been guilty of having it on repeat for hours. And hours. Wonderful. 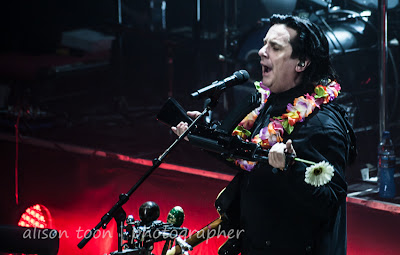 (There are Marillion couples, people who have met through a shared love of the music. It's possible there have been Marillion divorces too: in the words of one guy from Eastern Europe: "I told her, it's Marillion number one, Football number two, and you, my wife, are number three.")

So all of Radiation, and then a five-minute break. And the band returns: "80 Days", all those places speeding past when you're on tour. Then "Genie". There is something very special and very poignant in these songs, written from those hidden corners of thought, opened and exposed and painfully real. The things that many of us would hide away. Yet by being so brutally and painfully honest, these words make the emotions more innocent, more me-and-you-and-everyone-else, not-guilty, just human. "I let the genie out of the box". Listen to the song, read the lyrics, see if you disagree.

"Somewhere else", and Rothery is masterful. Beautiful, powerful rendition. 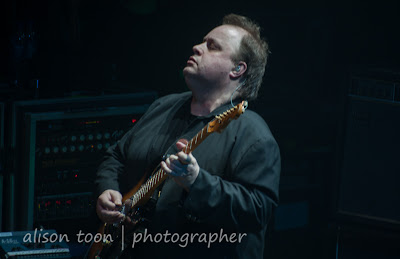 Then they take us back to earlier days: "Hooks in you" and H is climbing onto the footlight monitors (see Sunday's review for more on this). Rothery laughs. Pete jumps around the stage. Ian's drumming is insistent, throbbing: we know he's there, hidden behind the cymbals. Mark's soulfully, wailing keys... he peeps out, all twinkly-eyed, from behind the keyboards. It's a beautiful show. It's so enjoyable to be at a major show, with top-quality sound, gorgeous lighting, so many people obviously and energetically enjoying themselves. It's tangible: the audience loves the band, and the band loves the fans. It grows bigger and better throughout the evening. It's a family event, without the dysfunction, but with the laughter and the tears   And remember... this is only Day One. Saturday, we'll have Brave. Sunday: Sounds that Can't be Made. 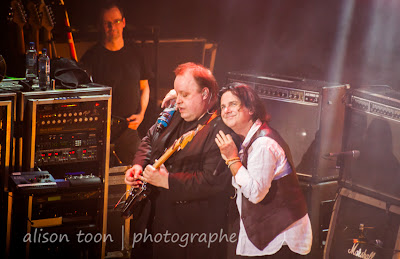 "Slainte Mhath", "Lavender", a penny for your thoughts my dear.

And then "King", with that beautiful, pastel-green Rickenbacker guitar. Such a strong song, so many layers. Something new to hear, each time you listen. Last song of the night? 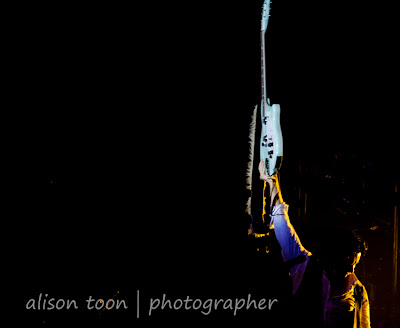 No... they are back with "Script for a Jester's Tear, and then "Happiness is the Road". And that one really is the last song of the night.

(At just after seven the next morning, we were back at the Civic Hall, lined up to buy our copies of the two DVDs and three CDs of the show. They had been manufactured overnight, packaged, and ready for sale. "Clocks Already Ticking". Amazing job. And it's top-quality recording, top-quality materials, top-quality packaging, all done in world-record breaking time! If you want to experience the show yourself, you can obtain a copy here on Marillion's website/Racket Records.

And yes, this was only the beginning of the weekend. And it just grew...

And yes, there will be more... Saturday and Sunday reviews coming soon!

And there are many more photos: Collection of Marillion UK Weekend photos;  hi-res on my website. 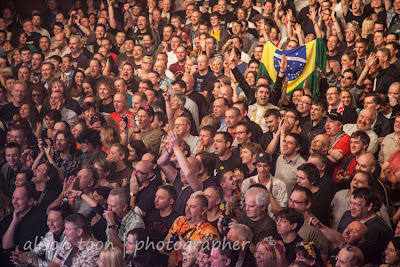