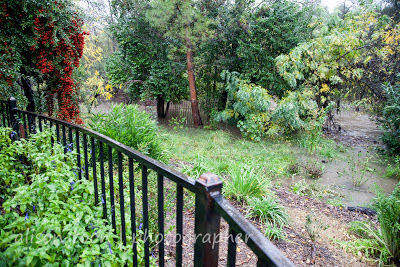 We've been hit by several rainstorms--or waves of rain--since late last week. The creek at the bottom of the garden is, for most of the year, a deep, wide, dry gully, with maybe a trickle of water, and a pool standing here-and-there where the flow has been blocked by grasses or beaver-dams (though having never seen a beaver here, I'm convinced that they are built by mother nature dumping sticks and twigs when a rainstorm subsides). On Friday, the creek reached the very top of its banks, but subsided yesterday during a few hours without rainfall. Then overnight, the rain just poured... and poured. Enough to wake pets and humans alike. It sounded like drums on the skylights and an ocean pouring from the roof to the deck. And... the creek has burst its banks. 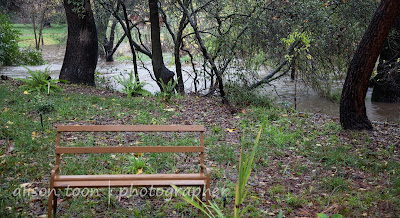 There's a steep slope usually here, then a small flood plain, then the almost-vertical bank of the creek. 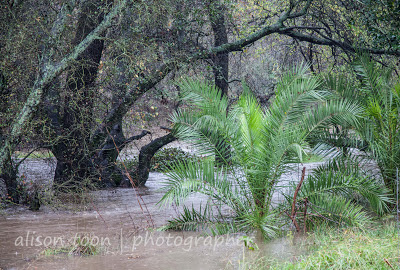 It's a little bizarre to see palms and oaks, side-by-side, almost-swimming. 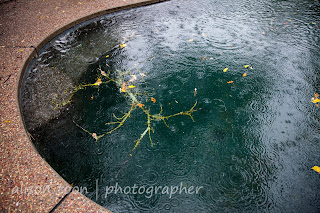 ... and talking of swimming, the pool is full to the brim, and not only with water. This branch went for a swim. I'll have to go fishing for leaves later, once the rain stops for a while. Hopefully.

Right now, we may be cut off by road, as the only way into this neighbourhood is across a bridge which just might be under water. No worries: it's warm and dry indoors, we're a way up from the creek, and I do have flood insurance just-in-case.

It will subside as quickly as it flooded. No doubt, taking some of the back yard (or rather, the public part of it) along with it.
Posted by Alison Toon Photographer at 10:37 AM