EDM (Electronic Dance Music, electro, techno... you know what I mean) isn't always the first genre of music that comes to mind when thinking about concert photography. It's sound best experienced in a midnight club, or a darkened secret festival field, and it doesn't (often) have leaping guitar players or expressive vocalists to capture images of. It borrows and remakes sound from other sources, other musicians, (sometimes paying them royalties for the samples, sometimes not, but that's not a rathole I'm going down today), adding or enhancing the drum and bass rhythm to an almost-hypnotic state. What are you going to photograph, one guy hunched over a couple of computers? Most often, yes, and that's probably why you don't see many photo galleries of EDM performers.

Pretty Lights headlined the second day of this year's TBDfest, one of several EDM performers at this year's festival. While Derek Vincent Smith has on occasion performed with live musicians--even an orchestra, at one time--at this show, he was alone on stage (unless there were others hiding behind the huge, I mean, HUGE, lit-up deck that he was working from). And the show very much lived up to the band name: Pretty Lights. The huge festival site was instantly transformed into a mega-night-club, but with sky for a roof and a ferris wheel as the far-away back wall. 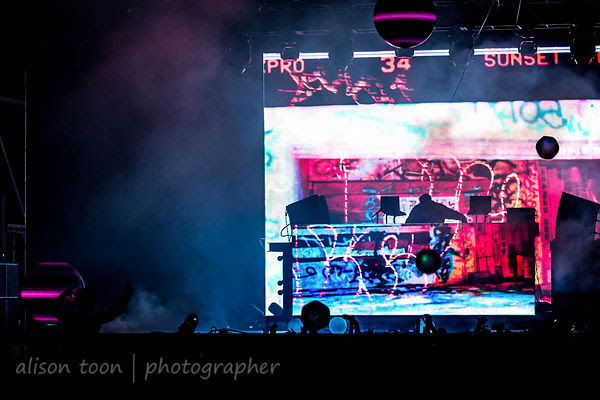 The pit is no place for photographers at most EDM events. At best, you'll get a few up-the-nose, laptop-obscured shots of the musician's face. They might be animated on stage, like Madeon, but often not. And you'll see none of the interaction or activity that you will at a rock concert.

(Access rights permitting), this is one time when you really, really, really want to be at the sound desk. If possible, up on a raised sound deck, with a view over the crowd. Take your longest lens.

You'll be photographing the atmosphere, not the performer. It's as simple as that. EDM+people=atmosphere, and be ready to be surprised with what you find in your camera.

Pretty Lights, the crowd, the movement and dance, the heat of a Sacramento night... it was all quite magical. (The strange, purple-pink blob that appears in a few of these photos? It was a pink flamingo with glow-sticks around its neck. Look out for the giraffe, too!)