I didn't quite know what to expect. Cody Simpson, "Paradise" tour; Aussie-surfer-dude-teen-hearthrob? Boy band music? Not my usual listening, not my usual show, not the sort of music I usually cover... but I waa intrigued. And  there I was. And you know what? Huge fun!!!! I really did enjoy the evening... and the audience? Wow. I think they'll remember it the rest of their lives.


All of the acts: under twenty years of age. All of the audience: same, apart from a few parents scattered through the theater. Really nice venue for the show--last time I'd been there, it was to see a symphony orchestra playing Zappa. Seriously. Good acoustics, good seating, great view from every seat, and nice people on staff. And the show started on time and finished at an hour that didn't have us all turning into pumpkins. Brilliant!


From the moment the ear-splitting girly-squeals started (first act, Before You Exit, playing their first song) right through to the leaving the theatre through masses of young women and their parental chaperones crowded at the escape-route-back-exit of Sacramento's Community Theater waiting for another glimpse, another moment with their heroes, I thoroughly enjoyed myself. And so did, absolutely, the audience, who knew all the songs and were all very-much in love.

These are young stars in-the-making. And while Cody Simpson is all of sixteen years old, he has fans who have been following him for three years and more... almost a veteran but with a full long life ahead. Cody's act mixes high-engergy dances with slower, gentle acoustics, and it's a well-balanced act. It's all music and live; good backing band, not tape loops. Prior to his arrival on stage, the audience is given a countdown-by-video; sneak peeks of backstage, "15 minutes to go!!!", a video of Alli Simpson's song "Why I'm Single" (which sounded much better than the version that's on YouTube)... ("Five minutes to go!!!")... until the countdown ended, Cody appeared in a cloud of smoke at the top of the stairs... and his show began. 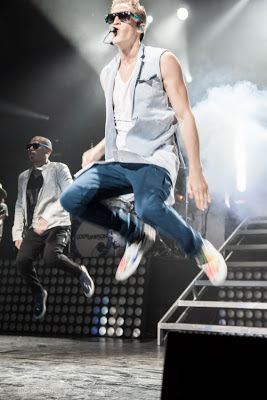 Part way through the show, Cody serenades a girl brought onstage from the audience. I think she said her name was Hannah (please contact me if you have her correct name). Very, very cute. And how the audience all wanted to be the chosen one!!! ("I love you Cody!", someone was shouting, "I love you!)


I wonder... what exactly is it that makes one young singer such a teenage hero? Is it the self-launched career and the young start, is it the songs, Cody's voice, is it good management and marketing, is it Cody's surfer's physique or is it just that certain je-ne-sais-quoi that has all these beautiful young ladies reaching to touch his hand? Whatever... Cody has a lot of fans, millions of Twitter followers all begging him to follow-them-back, and no doubt at all, a big-selling album about to be released ("Surfers Paradise", release date in the USA July 16th.

(You don't clap at one of these shows, no matter how much you are enjoying it. You scream. Remember the Beatles, Michael Jackson? Same idea. I found that hard to get my brain around... wanted to show appreciation, but screaming at my age doesn't seem quite... right. So I clapped, and felt out-of-place. Oh well.)


I really did enjoy the show. (Though I did have to ask myself which is safer for photographers: the pit at a Deftones gig, with heavy-guy fans throwing themselves over the barrier, on the edges of the mosh pit at Dillinger Escape Plan when Greg jumps into the crowd... or in the middle of the VIP area full of squealing happy girls at a Cody Simpson show. All different, but none without risk to person and equipment!)

NOTE: several of the final dates of Cody Simpson's Paradise tour have just been cancelled: he'll be joining Justin Beiber for his tour. Tickets are being refunded for the cancelled shows--and I bet his fans will be clamouring to see the Beiber/Simpson gigs.

More photos can be found on Flickr but please read about copyright before you cut-and-paste any Alison Toon/Toon's Tunes photos you find on this website or on Flickr or elsewhere... If you want to share, use the "share" buttons instead. Then we are all happy!

More photos from the concert, click on these links to go to the photo galleries: Cody Simpson, Ryan Beatty, and Before You Exit.
Posted by Alison Toon Photographer at 7:07 PM