On Friday evening, Hugh Laurie and the Copper Bottom Band put on a show at the Hammersmith Apollo--and as I was in the area, at Localization World, I couldn't resist going. The only ticket still available earlier in the week was standing-room-only, right at the back (and right at the top) of the beautiful venue. (There's space for one row of people to stand behind the final row of seating).

The Hammersmith Apollo used to be a cinema: a beautiful Art Deco building created at a time when the aim was to give all theatre-goers a wonderful visual and acoustic experience. The seats are heavily raked, with full view of the stage and/or screen, and the sound is clear. It doesn't need to be so loud that your ears bleed.  The walls and ceiling are still graced by the motifs of a byegone age. And when you enter the theatre, your first stop is in the lounge-style bar area, not directly into the theatre. (Though I did wish that the people were made to go to their seats before the first act began, as it was rather spoiled by latecomers who made everyone stand up while they noisily sought their seats.)

Those of you (probably in the USA) who only know Hugh Laurie from his nasty-ingenious Dr Greg House, may be a little surprised to see a Hugh Laurie music review. Those of us who grew up, (and older), in the company of Hugh's comic genius (Fry and Laurie, Black Adder, Jeeves and Wooster...) are not surprised at all. And if you cast your mind back to several House episodes, you'll see Laurie sitting at a piano, pulling out some nice jazz. And yes, that was really him. 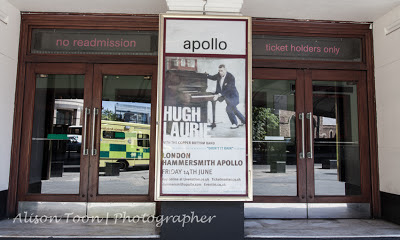 Hugh Laurie has teamed up with a group of excellent musicians, who call themselves the Copper Bottom Band. I particularly enjoyed Elizabeth Lea's rambunctious trombone playing, Vincent Henry's reeds, and Sister Jean McClain's singing was amazing. The music was real standing-on-the-corner-where-blues-meets-gospel, noodling with trad jazz on the way to New Orleans, and just having a huge amount of fun. Hugh danced, sang, played piano and guitar. "This is a very old song," he said, several times. They were old songs. They were good, old songs. The sort that still make you laugh and cry--and the sort that bring out the best in their performers.

I've seen a couple of other reviews of this show, one of which says that Hugh is basically using his fame as an actor to ham up as a musician. How wrong can anyone be... if you've seen his acting, heard his performances, then you know that these "old songs" and this music are an integral part of Mr. Laurie's person, just as much as his ability to act, and his ability to make us laugh. And by bringing these songs, and this band, to an audience who yes, may not have gone to see the show if it were not for "House", then he is doing a beautiful thing for musical history; he is sharing the music that he loves, with people who might otherwise never had heard it. And if Friday's show was an indicator, this new audience really, really enjoys it. I certainly did!

It was a totally delightful evening. Thank you, Hugh Laurie! 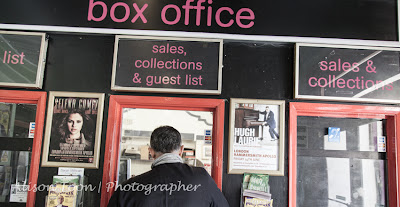