On micro-stock photography... earnings, getting rich, and finding-out where your photos are used

There has been a story making the rounds this week, about a woman discovering where her photograph has been used. She signed a release allowing the photographer to sell her photo, the photographer put the image up for sale, and it has been used around the world. There's another story in the news, too: about a political campaign is using Shutterstock images to suggest that people are changing their political views. Shutterstock, along with other micro-stock agencies including Fotolia (now part of Adobe Stock), are agencies that I have been approved to submit images to, and I have had a (very) small subset of my portfolio available through those channels for a while. The photographer has zero control over who buys the images. The only way you can find out where an image has been used is to search for the image (hint: right click on the image, then choose Search Google for Image.)

Receiving a cheerful email that says, Congratulations! You just sold an image! and announcing that you have just earned $0.29 is a little disheartening. (Example of what the buyer pays? Adobe charges $29 a month for bloggers and other buyers to download three images. Shutterstock charges are here. The prices are not enormous, but they are huge in comparison to what the photographer earns.)

It's my own fault and I am not complaining... much. While big-scale business marketers are paying lip-service to "authenticity" in images, what they still buy, more than anything else, is the ubiquitous posed, multi-racial-and-mixed-gender-group-with-toothpaste-ad-teeth-and-at-least-one-person-wearing-designer-glasses group shot of people, and I don't do those. I don't do posed people, I'm not into "lifestyle" family images-for-hire, and I just won't sell photos of children through micro-stock sites. So I'm not really expecting to make the top-stock-seller list anytime soon. Much as I would like to earn a fair price from the photos that I do sell there, my focus (sic) is on other types of photography.

The picture at the top of this post is one of my best-sellers, as it appears today on Adobe/Fotolia. I shot it in a fit of pique one day, after studying micro-stock sites, seeing all the (what I felt were) contrived images, and trying to work out what sells. I took a dollar-store jar of sea-glass and cockle-shells, dumped them on a table, and took the shot, indoors, no studio lighting, nothing. And yeah... it sold then and it still sells. Usually for $0.29 a pop.

My other top seller? This dude! I call him Rocky, but she might be Rochelle. He (or she) has appeared on many pest-control websites, including this one, badly distorted, and on this one, and accused of being smelly and destructive and nasty. He is part of an Alligator Farm and Petting Zoo in Arkansas (see the video at the top of the page), a character in a tale about wild birds, he's apparently been to Hawaii, he (or she) is the best-looking raccoon on this rather suspect 'naval' website and many other "cute animal" sites that you probably don't want to visit. He's present on many stock and photo sites that I, the photographer, didn't directly license him to BUT those sites just buy an extended license from another site and lo... Rocky's picture is for resale, everywhere. And I promise you, he didn't sign a release form, I just pimped him out for pennies. Don't be surprised if he sets up his own Twitter feed to complain. If he does, I'll expose the story of how his ancestors Ate My Goldfish. 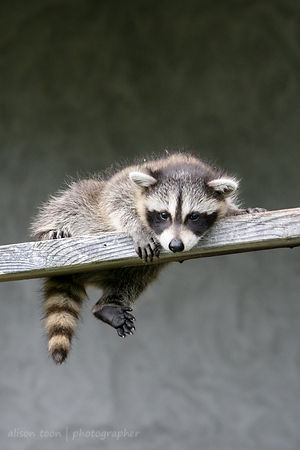 But seriously... most of my photos will never end up on micro-stock sites. None of my photography of performers, for example--they are for editorial use only (talk to me directly about those). But I am very happy to have discovered a new stock photography site, PicFair.com, which strives to be fair to photographers. If you buy photos for a blog, or for your company, please consider photos found there, because... they are fair to the photographers. Think of it like Fair Trade coffee. I'm waiting to see if it works.

(You can find Rocky/Rochelle here now on PicFair and on my own website for prints here, where the licensing costs for editorial or commercial use are extremely low in comparison to rights-managed Getty Images, but way higher than any micro-stock site. Confused, yet? Me too!)

All of my photos for print, and for editorial and/or commercial licensing can always be found here: http://alisontoon.com  It may be easy and inexpensive to buy images from a micro-stock site; if you are concerned, at all, about fair trade, maybe it's time to consider another way of finding the images that you need.
Posted by Alison Toon Photographer at 3:16 AM