Midge Ure at Harlows, Sacramento: still dancing, with tears in my eyes

In town on Monday evening, at Harlows Restaurant and Nightclub, Sacramento,, was Midge Ure, OBE,

Yes that Midge Ure, he of British bands Visage and Ultravox and more, co-writer with Bob Geldof of one of the most successful songs ever, (which was written to raise money for the famine in Ethiopia, not for personal gain... and it did, click on the link to find out more)... co-organizer, again with Bob Geldof, of Live Aid, an event that has to be one of the most memorable of my lifetime to date. You have to have been there... and by being there, I don't necessarily mean being in the crowd at Wembley stadium, London, or JFK stadium in Philadelphia, though that would have been incredible, but part of the global, motivated and hopeful audience watching the show, donating and raising money, and believing, truly believing, that everyone could play a part in helping to fix a horrendous and enormous human disaster. Yes, there have been events since Live Aid with similar motivation and goals, but there was something so fresh, so trusting and so huge about the first Live Aid that it remains a milestone in both musical events, and in humanitarian action. (If you're too young to even know what I'm talking about, you can read all about it, and buy a recording of most of the performance, and please do.) 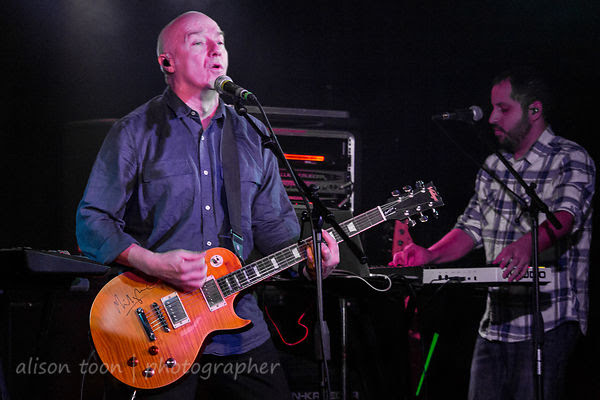 Midge Ure is seriously-good-people... and a seriously-good musician and songwriter, too. Playing to an intimate but passionate audience, two years to the day since the last time he was here in Sacramento, and which I somehow inexplicably managed to miss and I still can't figure out how, just blame it on a business trip... and Midge Ure and his band are still able to bring tears to my eyes. After all these years, I still can't work out if Vienna or Dancing that's my favourite song, but it doesn't matter because favourite doesn't matter, all of the songs are somehow-magical, old or new: it's the emotion in the music, the love in the song, and the heartbeat behind it all. You leave the show thinking that Midge Ure could be your best friend, your kindly neighbour with the Scottish accent, the guy with a gently-self-deprecating yet very funny sense of humour.

The setlist included songs from all of Midge Ure's career,  and closed with a cover of Starman, a wonderful tribute to David Bowie: 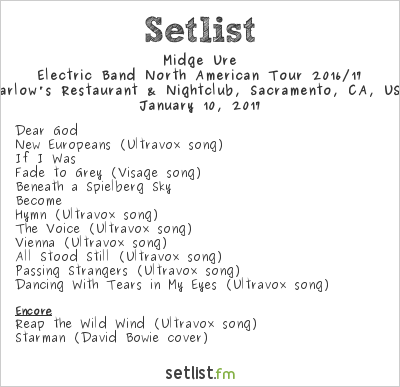 Whether it's Wembley stadium in 1985, or a Sacramento nightclub in 2017: wonderful show.


Find out more on Midge Ure's website! Tonight, they play San Francisco's Social Hall: then several more dates in the USA before heading back to the UK and Ireland. And then Australia and New Zeland! All tour dates, click here.

More photos from Monday's show at Harlows in the photo gallery, just click!

(I can't believe I wrote this without mentioning the lighting once. Ooops.)
Posted by Alison Toon Photographer at 2:18 PM