Pro-bono, and concert photographers, working for free. Who is stealing from whom?

A topic that causes a lot of discussion and complaint in the global, loose-knit community of music and concert photographers today, is photographers who work "for free". It's usually along the lines of, "those dudes who give their work away are making it impossible for the rest of us to earn a living". The notion being that there are fans, who are also photographers, who are willing to do anything to have their work end up being used by the band. And while that is certainly true--see how many fan pics end up on a band's Facebook, for example--I really have to question the frequently-stated belief that this is somehow stealing a livelihood from a pro photographer.

Here's why. (And do feel free to disagree: there's a Comments section below for that!) 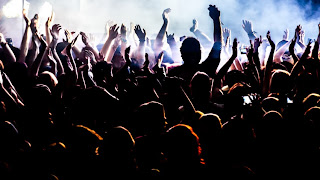 I've taken photos as concerts and festivals both here in the USA, and in Europe: both in recent years, with digital SLRs and instant connectivity via social media, and with film, for printed newspapers and magazines, and the first online publications at the dawn of the internet.

"Back in the day", there were two kinds of music photographers: those who worked directly for a newspaper or magazine, and who were paid a wage to do so ("work for hire") and whose photos were often credited with the name of the publication, not the photographer; and freelancers, who'd either arranged a contract up-front with one or more publications, or who hoped to sell their photos later. There was also the rare being, a photographer engaged by the performers, for example as tour photog. I didn't know anyone who made a full-time living out of concert photography alone.

Annie Liebovitz, you say? She started her photography career as a staff photographer for Rolling Stone magazine, She didn't start out by creating some of the most remembered portraits of music legends. She worked at it.

Today, in the photo pit, you have folks who work directly for a publication (including new types of outlets such as major and online image syndication/stock photo agencies, TV companies, concert promotors and many others who want photos for social media, music blogs and so on). These photographers have a pre-existing agreement with their publication, which might or might not be a paid engagement, but... they are working for a publication, and that's the reason they are given access to take photos. And you also have freelancers, who have usually arranged a deal up-front with one or more publications.. You may also have photogs directly engaged by the performers, for example as tour photographers. Sound familiar?

I still don't know anyone who makes a full-time living out of concert photography. We all have a day job that pays the mortgage, or a retirement fund, or supportive parents, or a wedding or corporate or stock photography business--something other than and in addition to concert photography, that pays some or all of the day-to-day bills. It hasn't changed! This is not a new phenomenon!

So why do I see so many complaints, today, about income being lost, and how photographers who work pro-bono are destroying the world??? Was there ever a time when all photographers given access to the pit made a good living, solely from concert photography alone? I really don't think so!

Paid jobs for commercial-use photography, or that coveted spot as a tour photographer, arise from proving that your work is the best for the band or performer. Portraits; planned photo shoots for publicity, promotions and advertising; posed and staged images used commercially on albums, posters, merch, etc. etc. etc. Or the much-coveted tour photography gig, following the band for weeks, maybe months, and cataloging both the shows and the behind-the-scenes, documentary, personal stuff that nobody else has access to. That's the paid work that as a photographer, you earn, by proving that you're good. (And yes, some of this too might be pro-bono work, but as long as there's an agreement between the performers and the photographer, none of us should have any problem with that. It's nobody's business except the photographer and the band's. It's a contract, it's an agreement, and both parties are free to agree, or not.)

There are many, many more, skilled and good, concert photographers working shows and festivals these days than there were when I first started.  Quality photo equipment is more accessible to many more people. There's a lot more competition to capture that one shot that people will remember for the next fifty years. But that competition, whether it's one person or a hundred, doesn't change what you, the photographer, see, when you take the shot.

I really don't think anyone is stealing my, or your, opportunity to be as successful as Ms Leibovitz. That type of success will never come easy: you need a huge amount of talent, the right opportunity at the right time (and being able to see it as such), an awful lot of very hard work, plus a lot more hard work. It sure as hell won't come to us if we spend more time complaining about "those photographers working for free" than we do improving our own photography and networking skills.

Don't worry about what someone else is earning for their photos. Worry more about what you're seeing through the viewfinder, whether the composition is good, if the image is in focus, if the exposure is correct. That's what's important.


You can find my music portfolio here: http://alisontoon.com/music

To see some of Annie Leibovitz' wonderful work, check out the tour by clicking here. It's not concert photography! In San Francisco from March 25 to April 17.
Posted by Alison Toon Photographer at 9:08 PM