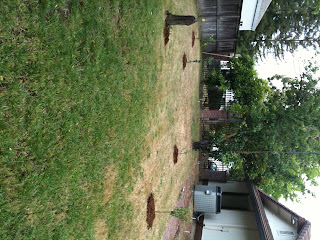 Easy digging, because we've had rain since Friday, and the earth is soft but not soggy.

Lemon is "Improved Meyer" which, now I read the label, is in fact not a lemon. ???  It is a dwarf citrus tree that is a hybrid cross of lemon, orange and mandarin. Well now I just have to go out and find a real lemon too!

Pomegranate is "Wonderful" and must be carefully pruned each year, during winter, after New Year, when fully dormant. First pruning: cut back to two or three scaffold branches, evenly spaced. Second pruning: cut to two, 24" laterals on each scaffold branch. This is supposed to help develop the strong straight trunk to support the heavy fruit. Picture on label looks a little like an ice crystal growing.

Lime is "Bearss Seedless" and is really a lime, dwarf. Grafted rootstock so suckers must be removed. Otherwise, not much pruning needed. Same with the lemon/orange/mandarin masquerading as a lemon.

Peach is "Giant Babcock White" which apparently needs 450 hours of below-45 degree temperature. I wonder how that will work out. I suppose that is only 18 days, and this year, no problem with that. Should be pruned in same way as the pomegranate, but starting with three or four scaffold branches.

Blackberry is blackberry and I truly didn't know until now that they only fruit on second-year growth--and that, once fruited, a cane never fruits again. Maybe that's because I've never planted one before, just picked them in the wild from giant, overgrown, roadside tangles.

The garden is an adventure, a discovery. The older fruit tree that overhangs the horse-next-door's shelter has small, hard, dark-green fruit on it now. I found two on the floor: they have the curvacious form of plums or peaches. I'm thinking plum, but it will be fun finding out for sure.
Posted by Alison Toon Photographer at 7:39 PM