Avenged Sevenfold, A Day to Remember, and Ho99o9, at Sacramento's Golden 1

Monday evening at Sacramento's Golden 1 Center: Avenged Sevenfold, with A Day To Remember and Ho99o9.

Sometimes, it's OK to go to a show without cameras. I have a hard time persuading myself of this, but... sometimes you have to remember what it's like, in the center of the crowd, at the front, at the side, behind a giant with his metal horns up or waving his smart phone, or being stepped on by someone dodging backwards to avoid a hurricane of a circle pit... working your way through the gaps to a spot closer to the stage, then back out towards the back for a different view, trying not to get in anyone else's line of sight while they step right into yours. The crush of the crowd, the spilled 14-dollar beers, the balanced soft cup of water because they wouldn't let any bottles onto the floor, the thousands and thousands of happy, excited, jumping, shouting, singing, moshing people.

It was fun. It was a great show.

Openers, Ho99o9. From the WTF? faces around me in the crowd, I knew their sound was having the same effect on everyone else but... by the end of the set, I wanted to hear more. And I definitely want to photograph these guys, properly, next time around. Check them out... 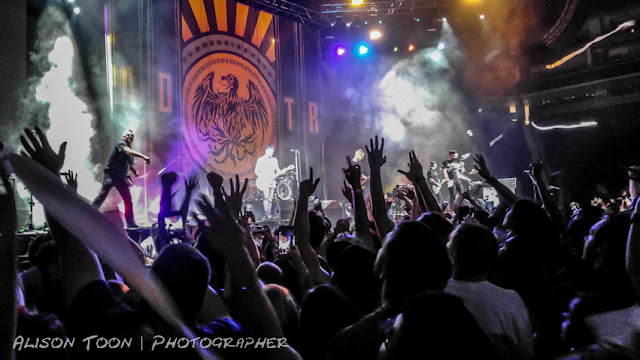 Then A Day To Remember... and remember it, we most certainly will. Hugely entertaining from start to finish; loud, hectic, guys going crazy in huge circle pits in the crowd, crowd surfing (with one person standing on another, like a guy on a surf board), beach balls and loo rolls thrown into the crowd... the music, oh yes! Here's the set list. I'm glad someone noted it down; I was far too busy just watching and jumping and dancing and keeping out of the way of the huge bald dude who was hurtling round and round in the crowd.

And then, Avenged Sevenfold. First time I've seen them indoors! They brought their signature pyro, lots of it, huge waves of heat in the A/C chill of the Golden 1 Center (a chilled temperature that had been a huge shock, earlier in the evening, after standing in line in full sun and about 100 degrees F.) Huge screens on stage, beautiful art and cartoon animations and outer space and more art and piles of skulls...and a stage that reached way out into the center of the crowd, which the band used to bring the show right into the middle of the people. Always something going on, something to watch. The night of M Shadows' birthday, yes we sang, all the crowd in the Golden 1. They played all the songs everyone was waiting for; they could have gone on all night. 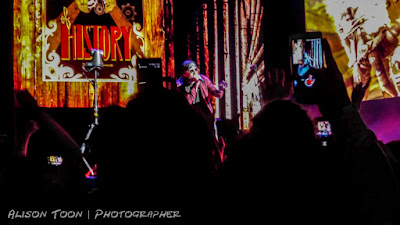 A show to remember.

Avenged Sevenfold are alternating dates as headliners with dates on tour with Metallica; see if you can catch one of the shows!

I did take a few photos. On my phone. Everyone else seemed to be taking videos on theirs. I guess I'm just a photographer through and through... cameras or phone or just somewhere inside my brain.