It was a real treat to see Gemini Syndrome on the list of performers for Chicago Open Air.

At the opening the Sunday show, the third day of the first-ever Chicago Open Air festival, there were a few minutes of doubt... nobody was inside the grounds, not one person, except for festival workers, security, a few photographers and other press, and a lone, happy, smiling woman, who brought a folding chair and placed it, front row and center, before the stage on which Gemini Syndrome was scheduled to perform. Best place in the house!!!

What had happened? Was everyone still sleeping after two days of non-stop music, culminating with Disturbed late on Saturday? Were they having a Sunday-morning lie-in, to be ready for Five Finger Death Punch and Slipknot, later on Sunday evening? Were they just not turning up until later?  No... for some reason, the "gate" time had changed to 30 minutes later, and so the show started 30 minutes later too, and by that time Gemini Syndrome had the biggest crowd I have seen for them yet, and it just kept on growing. Excellent number of Synners for a Sunday morning, and an excellent show, including favourites Pleasure and Pain, Basement, Resurrection and Stardust from their first album, Lux, plus Eternity, Anonymous, and Remember We Die from the upcoming second album, Memento Mori, due to be released on August 19th (so there's still a chance to pre-order through PledgeMusic, iTunes and Amazon.)

This was my first opportunity to see the band with the two new guitarists, Daniel Sahagún and Charles Lee Salvaggio, and yes, it works!

Later in the day Andy Wright and I had the much-appreciated chance to sit down and chat for a while with Brian Steele Medina, drummer with Gemini Syndrome. (You might remember a previous conversation with Brian, back in September 2014, when plans for Memento Mori were already under way... and that led to the first question of the interview:

Alison: We're all very excited about the new release in August. It's been a long time waiting to happen... seems to have taken longer than planned?

Brian:  We were touring with Lux for a long time, two years, and we started writing the new album in March, were on tour from August to November, in the studio from November to February, then touring again and now we are here. It feels like a long time, but it feels good; I'm pretty sure we'll be on tour for a long time with this album too!

Alison:  I think you should be really proud of the audience you drew this morning. After the first three songs, I went up to the top of the Toyota Park stadium with a view over to the second stage, and your crowd was huge! We hadn't realised that the gates were opening late this morning, and your crowd went from one person to huge as all these people poured in, the moment the gates opened.

Andy: I have a question for you; we're wondering about how you, the performers, feel about social media and about everyone using their cellphones during shows, posting cell phone photos and videos all over social media? [We're seeing different reactions from different performers, some banning phones entirely, some embracing it and asking fans to post everything.]

Brian: I think it's just a different age... it would feel weird to me [taking pictures during a show], because I grew up in an age when you went to a concert, and you just watched the concert. But my little brother, my youngest cousins? They are teenagers, and they grew up with phones in their hands. I think it's their version of love: to hold on to the memory. They do it naturally, with their phones. My first cell phone camera took horrible, small little pictures but today? There are all these cool apps for making videos on your iPhone. It's great technology. I think that technology is going to keep on growing, and we have to learn to work with it.

It's just their version of love...

(And then we talked more; about how we can encourage Gemini Syndrome to play in Toronto, and in Sacramento again--it's been too long!!--about Niagara Falls, family weddings, glass-bottom buildings, ink tattoos, henna tattoos, and just how many interviews Brian and Aaron had done that afternoon--it was four in the afternoon when we sat down on the comfy couch in the Chicago Open Air press tent, and they had been in non-stop interviews since their set finished at around 12.30.. I'd say that that, and the huge and enthusiastic crowd, are all showing what Toon's Tunes/Cameras and Cargos have been saying for a long time: Gemini Syndrome are here for the long haul, and if you haven't heard them yet? What are you waiting for?)


Thank you, Brian Steele Medina, for the time--it goes by too fast!! And to Andy Wright of Andy Wright Studios for managing the interview and for the photo below! Transcription errors are all Alison's...)

And catch them on tour now, throughout the USA! 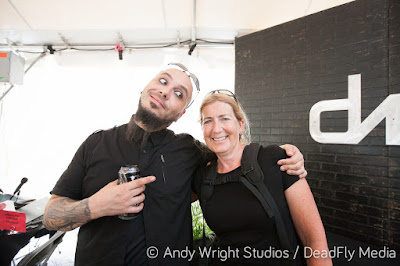