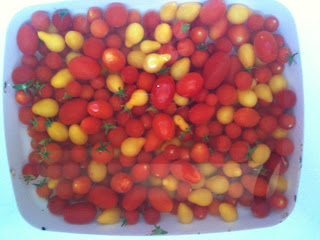 Large batch of cherry tomatoes picked on Saturday--the day my new dehydrator arrived! There are yellow pear-shaped tomatoes, mini red ones, little gems, and Juliet grape Romas (they, for some bizarre reason, make me sneeze, those Juliets).

First I washed them, as they have been allowed to sprawl all over the garden, as well as climb up bamboo tripods. 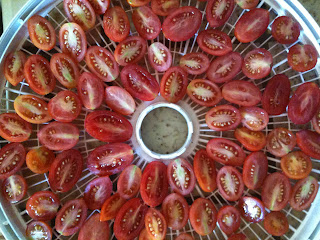 Then I halved them and laid them on the dryer racks, lining them up towards the center. That is not so much OCD coming through but rather following the instructions in the manual. The yellow ones looked better on the rack, all perfectly aligned, but the photo was fuzzy.

Then turn on the dehydrator: 135 degrees F, and leave alone. There's a fan inside that circulates the air through several layers of drying racks. It took longer than the manual/cookbook said--more like 24 hours than 6, or 10 hours--but eventually... 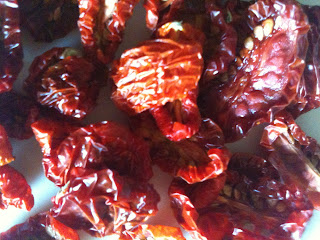 TOMAISINS!!!  Tiny, sweet, tomato raisins that are like little chews of sunshine.

And I'm supposed to store them away and eat them later? Really?

Better grow a half an acre of them next year.
Posted by Alison Toon Photographer at 6:00 PM